I'm pretty sure there's a lot more to Wriphe than being really, really good looking.

Today, on "Comics Out Of Context," I present to you 1940's Superman #7. The following panels are unaltered and are presented in the order that they originally appeared. (Though there may have been some other panels in between.) 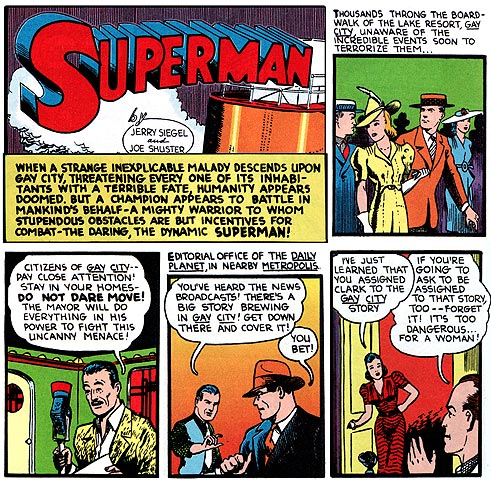 Granted, the word "gay" didn't gain widespread usage as a euphemism for homosexuality until the 1960s, but did they really have to refer to "Gay City" quite so liberally? This story was originally published with no title, but it has since been republished as "The Exploding Citizens" and "The Gay City Plague." Someone at DC Comics has a great sense of humor. 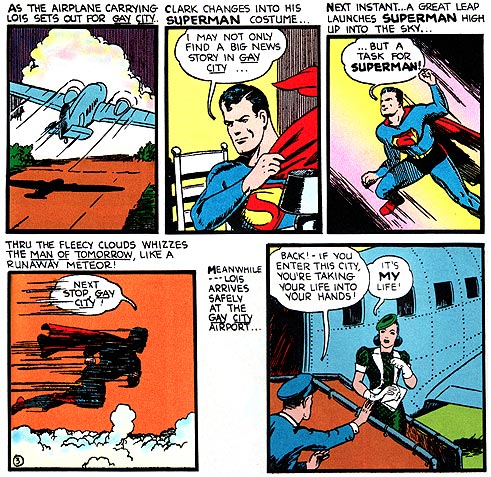 If the "uncanny menace" of Gay City is so dire, why do they even let planes land at the airport allowing her to take her life into her own hands? I know you won't believe me, but the rest of Lois' action in this story is limited to her chewing gum, sitting very still, and sleeping. (Would I lie to you?) In comparison, Superman "whizzes" once and "streaks" three times in this story, including... 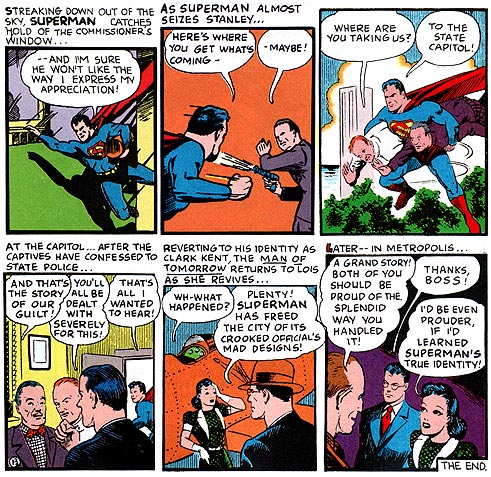 Ah, Superman, the only person able to defend the gallant citizens of Gay City from the systematic oppresion of their corrupt leaders. He single-handedly makes the villains confess their evil deeds to the police. How, you ask? By flying them there. Stanley, the corrupt Gay City Commissioner and Kotzoff, the Mad Gay City Scientist (who Superman is "horrified" to discover has no tongue -- don't ask how) are apparently much more afraid of heights than the wrath of the angered Gay City Citizens. Thank you, Superman! I suppose all's well that ends, well, gay.