There are forces in Wriphe working for you and against you.

Research published in the September 2010 issue of European Journal of Wildlife Research suggests that wind-powered turbines should be painted purple in order to reduce bat fatalities. (Before you ask: blind bats don't care about the color of the windmills, but their insect food source apparently does.)

Obviously, this is a perfect opportunity for windmills to join the list of objects that have inspired Batman villains. The list currently includes items as varied as calculators, calendars, cats, clay, clowns, and crocodiles. And that's just the letter "c"! It's no more ludicrous a motif than that employed by bat-villains Mirror Man (who uses mirrors to confound his foes!), Kite Man (who escapes from his latest crime with the aid of a giant kite!), or Polka-Dot Man (who uses polka dots to, um,... well, you get the idea). 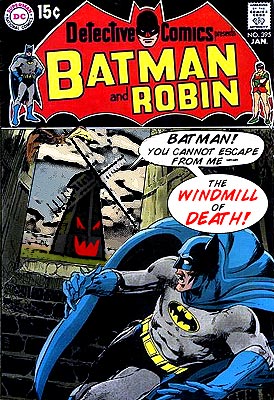 What happens when green technology becomes greed technology? Will the long arm of the law be severed by the blades of the Windmill? Can the Batman resist the Windmill's strange allure and save Robin from a gristly fate? Find out next week: same Bat-Time, same Bat-channel!