The story of Wriphe is quicker than the wnk of an eye...

Stick a bunch of women on a secluded island, and there's no telling what awesome stuff they will come up with. My bet would have been on shoes, not inorganic and non-metallic transparent flying machines, but what would I know about women? 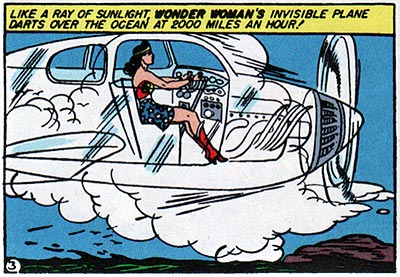 The speed of sound at sea level is 343 meters per second, or 768 miles per hour. Traveling above the ocean's waves in 1942 in her "silent, invisible plane," Wonder Woman is traveling at speeds approaching Mach 3! The technology of Man wasn't able to reach those speeds until the mid 1950s. In fact, the first pilot to pass Mach 3 was killed in the attempt when he turned too fast and horizontally inverted his plane. That plane, the Bell X-2, had a liquid-fueled rocket engine, not a seemingly simple propeller! What a pilot that wonder woman is!

I was discussing Wonder Woman with my companions over dinner last night (I was promoting Wonder Woman as a movie franchise possibility), and none of us could figure out why she had an invisible plane. So I looked into it. The answer: She needed to fly a wounded Steve Trevor back to Washington D.C. from Paradise Island in Sensation Comics #1, so she took a propeller-driven plane. It just so happend to be invisible.

Why was the plane invisible? Probably so that it couldn't be seen. After all, it was 1942 and there was a war on. Internationally, soldiers and civilians alike were armed with silhouette cards and told to stare skyward to identify incoming enemy fighters. A plane flying over America's capital would no doubt cause an alarm, yet perhaps a flying woman and her comatose patient would be harder to spot. (But would no doubt also raise quite an alarm if spotted.) When she stayed in America (presumably suffering from the hideous Nightingale Effect), Wonder Woman simply kept the plane. And the rest is pop culture history.

Now, why, you ask, would the immortal Amazons of Grecian myth inhabiting Paradise Island have an invisible plane handy? Well, loyal reader, that's exactly the sort of question that you aren't supposed to ask about the "physics-optional" environment of super hero comic books (where men can vibrate their molecules to penetrate the fabric of space-time, shrink themselves with material found in white dwarf stars, and drink cola that gives them the ability to deform their body like Silly-Putty). If the "why"s are the sort of questions that keeps your mind occupied while reading these stories, may I recommend romance comics? They tend to be much more straightforward. 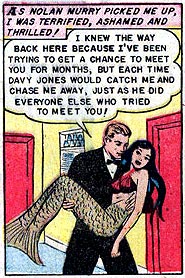 See? Nothing inexplicable there. (For the whole story, rush to your local newsstand in 1952 and pick up a copy of Glamorous Romances for one shiny dime. No time machine? Already spent your dime on .025 gallons of gas or .0000025 grams of Plutonium?Then visit here. Your mileage per gigawatt may vary.)