Wriphe has a meaning only if one barters it day by day for something other than itself.

The 2013 NFL draft is tonight. I have no idea who the Dolphins will pick, but I do know that they will look like fools matter what they do.

I'm not talking about the moves of GM Jeff Ireland, who during the offseason has shipped out proven talent while overpaying for new questionable talent. (As I type this, rumor has it that Ireland is trying to trade Davone Bess — among the best third down backs in the entire league — to move up a few picks in the first round for another recievier. Sigh.) No, I'm talking about the new uniforms unveiled this week. 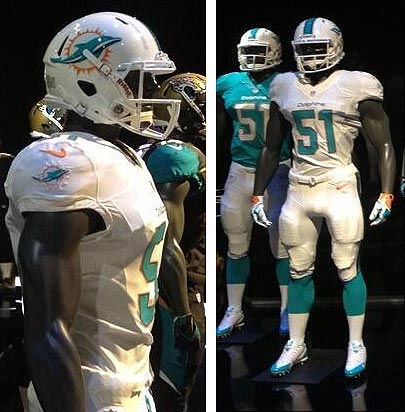 Yeah, that's more or less the logo that leaked a few months back. Like I said then, it's not so much bad as it is bland. All one color, with the sleeve logo smaller than the Nike logo? Gag. If there is one thing that these uniforms scream, it's "yawn."

With the product that Jeff Ireland and company are putting on the field, I guess it's a good thing that I don't really want to look at it.