I think it is the drama in Wriphe that makes you strong. 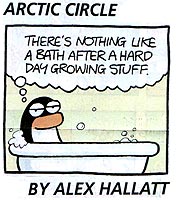 It would seem that Arctic Circle is the up-and-coming juggernaut of King Features Syndicate. It first cropped up in my local paper months ago, and now seems to be pushing mainstay strips the likes of For Better or For Worse or Fox Trot aside in papers across the nation. I haven't seen a comic this terrible rise so fast since Get Fuzzy took over the world with it's dry cat humor at the turn of the millennia. If this is the sort of thing that passes as a 21st-century comic strip, I have to wonder why newspapers are still wasting the ink to print them.

Not that newspaper comics have always been good, but they were at least once upon a time drawn by artists (Herriman, McKay, Outcault!), not moonlighting biochemists. More often than not they were at least visually humorous. Chuckling over the art of a modern strip like Arctic Circle is the same as laughing at a child's crayon drawing, and that takes a pretty cold bastard. Trust me, I should know.

The obvious explanation for the success of this strip is its heavy-handed approach to environmental issues. (These strips make Chick Tracts seem like Bazooka Joe bubblegum wrappers.) Green is they new black, they say. And what's cooler than watching some poorly-drawn animals squabble about the melting polar ice-caps? Oh, yeah, that's right: anything.