I wish Wriphe was more like video games because then I would always get the girl.

Have you seen this commercial, released in time for NFL play-off season? I think it's great, but it fails to answer the most important question it raises.

What, exactly, does McDonald's have to do with love? A Big Mac sure doesn't look like love. Neither does a globe-spanning for-profit organization that steadfastly refuses to pay employees a living wage.

At dinner the other day, I made the comment that Pringles were made of an extruded potato paste and couldn't be called potato chips in England. A fellow diner responded by saying that in "some countries," it is illegal to sell McDonald's hamburgers to dogs. Needless to say, that raised some eyebrows at the table.

She had read the statement somewhere that she insisted was "not Facebook." She claimed that the source of the quote was celebrity chef Jamie Oliver. Could this be true? Were McDonald's hamburgers not good enough for dog food? This demanded research. To the Internet, Robin!

The source for the statement seems to have been an episode of Jamie Oliver's Food Revolution quoted by the Daily Mail in its 2012 report that McDonald's had eliminated so-called "Pink Slime" from its American burgers. Oliver decried the Pink Slime as dog food sold to humans, not the other way around. It turns out that the European Union bans the use of Pink Slime in anything other than dog food. So Pink Slime is okay for dogs; that's what it is intended for.

Personally, I think it's cruel and inhumane to serve McDonald's hamburgers to dogs, but I can't find any evidence that it is illegal anywhere. It is certainly acceptable in America, and so far as I can tell, is also allowed in Canada, England, Russia, China, or any of the 116 other countries with a McDonald's restaurant. That doesn't mean that "some countries" don't ban it, but I can't find one. So next time you're stopping for a Big Mac in Kuala Lumpur, it's probably safe to give a bite to Fido.

But I can't give my dining mate too much of a hard time. It turns out that all the fun food facts we discussed the other day were wrong. I was right once upon a time, but in 2009, a British appeals court declared that denying that Pringles were potato chips was costing the country £20 million (about $30 million) in annual tax revenue. So now Pringles are legally recognized as potato chips in the U.K. no matter how much actual potato they have in them. Yum.

Earlier this year, my father bought something like 40 acres in Fountain, Florida. He bought a camper so that he could sleep on the land while he worked on cleaning it up. Yesterday, his carefully laid plains went up in smoke.

It seems that Dad was clearing some brush with Prometheus' good friend, fire, when things got a little out of control. Soon his camper and his van were burnt to ruin, along with everything inside of them. By 5PM, the only things still intact were Dad and a rake. 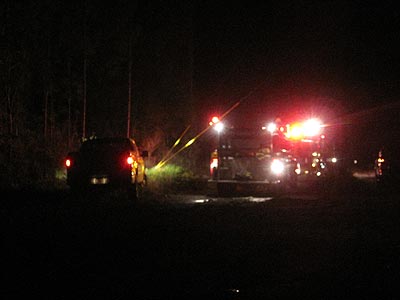 A good Samaritan named Al lent Dad his cell phone so that Dad could call me to rush out on a 484-mile round trip to recover him to Georgia. It was my first trip to Dad's property. Too bad it was all in the dark.

I arrived in Fountain shortly after 11PM EST (10PM local time) to find the Fire Marshall still on the scene, looking for evidence to prove his theory that Dad had been cooking crystal meth. I'm sorry I wasn't there earlier, I could have saved that man a lot of trouble. Dad might do a lot of crazy things, but he's far too lazy to cook crystal meth. 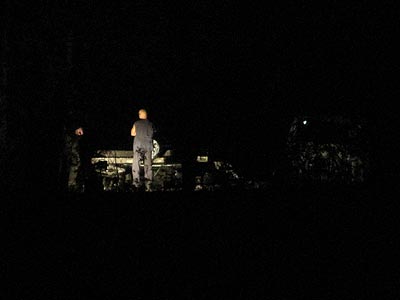 Dad was a little worked up over being accused of making drugs in his electricity-free trailer in the woods that had just burnt up in a mysterious fire. He insisted that we drive straight back to Georgia once the Marshall let us go. I hadn't eaten anything since 2PM, so I stopped at a 24-hour McDonald's in Eufaula, Alabama. If a McDonald's hamburger doesn't taste great after you've fasted for 14 hours, it isn't ever going to taste great. Therefore, I can definitively say that a McDonald's hamburger is never going to taste great.

All in all, it could have been much worse. Dad's alive and I don't have to hear about how awesome it's going to be for him to camp out on his land in Florida anymore. I'll consider that a fair trade for my time.

The local paper here in Newnan, Georgia, just ran a headline on the front page about the theft of a bag of hamburgers valued at about $20 from a McDonald's in Augusta, Maine. The thief got away. Seriously, that's the whole story. "Guy gets away with stealing hamburgers from McDonald's." How fascinating.

I should probably be pleased that I live in a town where the story of a theft 1,300 miles away qualifies as front-page news. I guess there weren't any new restaurant inspections or church-group outings yesterday. If that's all they got to print, maybe they should save a few bucks by not publishing a new paper every day.

Continuing my tirade against fast food marketing from last month:

My brother suggested that the Mexican slogan for McDonald's ("Me Enchanta") was used because the translation of the American slogan, "I'm Loving It," is apparently some sort of Mexican slang for having sex. As I recall, not too long ago, McDonald's ran a Big Mac commercial in which several guys said they'd "hit it," which is American slang for having sex. So I wouldn't think that McDonald's would really be all that opposed to saying that Mexicans were having sex with the food.

Clearly, Hardee's has no such compunction. Hardee's has gathered a fair amount of attention recently from advertisements with Padma Lakshmi having oral sex with a hamburger. Lakshmi is the perfect spokesperson: an authority on food (she rates food on television, so she must be an expert!) and a former model (the equivalent of a role model in modern America). Subtle, no. But if people are talking about it, that pretty much means the ad is working.

McDonald's is out to brainwash America (and then the world -- Bwah-Ha-Ha-HA!) to eat their crappy hamburgers. I know that this is not exactly breaking news, but have you noticed the recent trends in McDonald's commercials? In order to dig the company out of the horrible publicity pit they have found themselves in recently, they have decided to simply try to pressure us back up to the counter.

First they tried to convince us that our grown friends would really love McDonald's gift cards for Christmas. Ask yourself, have you ever, even once in your life, wished that your wife or parents (or Santa, whoever) had given you a gift certificate to McDonald's instead of cash? "Gee, I sure wish that I could have nothing but tasteless, fattening meals everyday instead of paying my rent." Even as a child, I would rather have had the cash than a Happy Meal toy. (And yes, I do remember the first time I chose a Big Mac over a Happy Meal, and it was indeed because of peer pressure. >Shakes fist!<)

Then they tell you that their food is good for whatever meal you would next be having. In a commercial, one man serves double cheeseburgers as hor d'oeuvres despite his friend's objections. When the rest of "the gang" find the burgers served as finger food and approve, the lone dissenter, also known as "the voice of reason," is forced into compliance with his friends lest he risk defenestration or some such other fate as commonly befalls the malcontents of society. Certainly, McDonald's has no patience for traditions, mores, or manners so long as you can still stuff your face at their trough.

Just like the communists, they next attack the arts and the intelligentsia. In a commercial where "the gang" are going to a football game in face paint, the one fellow who actually makes an attempt at creativity and team spirit is ridiculed, emasculated by his friends. And this occurs after the artist has been demonstrated to perform due diligence: attempting communication with his friends about the planned demonstration. Apparently, to be an individual in Ronald McDonaldland is to risk constant belittlement and ostracism. (As I recall, "the gang" is represented by minority racial groups and women, and the "outcast" is a white male. This means that the peer pressure to conform is being issued by traditionally oppressed American ethnic groups, an insidious paradigm shift designed to subconsciously cow the skeptical viewer into compliance with the message to prevent the outward appearance of political incorrectness and the accompanying social consequences.) I don't suppose it's a coincidence that Ronald McDonald wears the same colors as the soviet flag!

In another ad, a married man conscientiously contacts his distant wife to ask if she would like a meal from McDonald's. She fails to define her desires to him, and he is left in the uncomfortable situation of having to buy her dinner without offending her. Clearly, McDonald's would have us believe that the failure to memorize both their menu board and the fast-food eating habits of our friends and lovers will result in relationship difficulties. According to the company of the clown, we must eat at McDonald's or we risk dying both alone and hungry.

Finally, in the most shocking of all, a red-headed young man sits on a park bench beside a statue of cross-legged, smiling Ronald. As the seconds pass, the young man finds himself compelled to assume the same pose as the statue. McDonald's peer pressure tactics are so great that they'd have you believe that you must conform even with their statues!

It's not 1984 anymore, McDonald's! Wake up and smell one of the 1.3 million cups of scalding hot coffee that you sell every day! Make good food and we'll come eat it. If your best idea for convincing me to come into your store is to hypnotize me with a constant stream of blipverts, you've got even more problems than Morgan Spurlock suggests that you have.