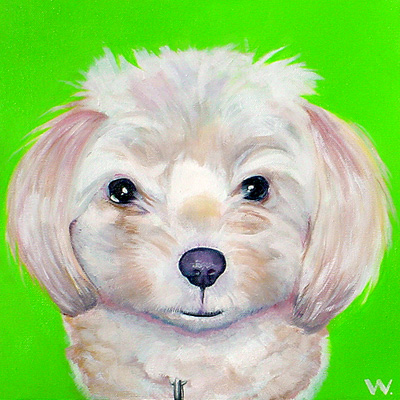 When my brother was young, he used to really enjoy stuffed animals. He had hundreds of 'em. Now he owns a Maltese/Pomeranean dog. Really, I guess I should have seen it coming.

Professional painter Robert Stackhouse once told me that the way to make a career out of selling paintings was to discover what other painters were not providing in a given market, then produce those paintings for that market. Until I find that niche, expect something a little different with each painting. 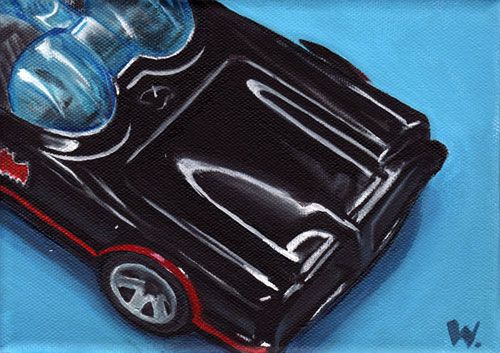 I would like to go on record as saying that Vonage has the worst television advertisements in the history of recorded man. Essentially, their commercials boil down to the simple phrase, "idiots and criminals use our product!" Now, I'm all for the peer-pressure approach to mass marketing, but I really think that Vonage has done something wrong here.

Vonage's previous marketing campaign, something that can only be called the "Hey, look! Things are happening in the world that are much more interesting than our sales pitch" sales pitch, was bad enough. But now their ads feature an orange-painted van, some cross between the Scooby-Doo Mystery Machine and B. A. Baracas' A-Team fortress, driving by and hitting people in the heads with pizza boxes like some twisted Grand Theft Auto side-mission. (I'm sure these pop references are intentional, as Vonage is trying desperately to reach people like me who are computer literate and have a, shall we say, invested interest in popular culture.) While this would seem to be a step in the right direction, rising from "please ignore our product" to "assault and battery," the recipients of the products are always the lowest common denominators of society: the stupid, clueless, or criminally stupid or clueless.

Some people will tell you that the purpose of television advertisement is to simply get the name of your product stuck in the heads of potential buyers so that when the time comes, they think of your product. And, granted, most people don't think about the commercials on tv, their eyes simply glaze over as they wait for bumper music to tell them that Wife Swap is coming back in seconds. (I had a roommate once — hi, Jason! — who had the uncanny ability to perfectly time all commercial breaks in his head. We'd be watching something and he'd channel surf during commercial breaks. I'd always get nervous about returning from commercials and missing the cliffhanger resolution, but he'd always click back exactly as the show was coming back. Really, I think it qualified as a super-power. I'm sure that he'd make a fascinating case study for some up-and-coming Raleigh St. Clair. As a result of this ability, however, he NEVER watched tv commercials and had no memory of any ads.) However, I think this approach to television marketing is too simplified. What you don't want your customers to do is to think about how they don't like the message that your sending.

Take, for example, the recent Visa ad where a well-oiled machine of holiday shoppers wanders in lock-step through a cafeteria line until some well meaning but unenlightened individual pays with cash instead of his Visa card and the entire operation is halted in its tracks as the cashier fumbles with change. Visa, while everyone does wish for smooth transactions, telling them that they are robots when they use your card isn't going to endear yourself to anyone's use. Mindless automatons hate to be reminded that they *are* mindless automatons.

Vonage is trying to hit that same market that Quiznos tried to tap with those two talking rat-toejam things a few years ago. (I once heard them described as Mr. Potato Rats, but I think they are officially called spongmonkeys.) As Quiznos soon learned, having unidentifiable rodents pitch for your sandwiches is a bad idea, even if it does get people to recognize your product. I haven't eaten at Quiznos since, and for the same reason, I won't even consider using Vonage: I just don't want to be among the people who respond positively to your bad advertising. (On a related note, Quiznos recently ran ads calling prime rib the "king of steaks," which so angered my father, I got an hour long lecture on cuts of meat. Needless to say, he's not eating a Quiznos, either. Related note number 2: It may come as no surprise that an Executive Vice-President of Marketing for Quiznos was recently arrested for soliciting an underaged girl for sex. Clearly Quiznos' marketing department has a hard time figuring out what their target demographics should be.)

Why do I mention all of this? No reason, really. I just hate those Vonage ads.