A: Just as with older systems, the new electronic voting units allow voters to cast votes for write in candidates. Voters should note, however, that, under Georgia law, write in votes are only counted and compiled for those candidates who have filed an official notice of their write in candidacy.

Up until a little over a half-century ago, it was considered bad form to campaign for yourself as a political candidate, especially for the Presidency. Funny how times change; even "write-in" candidates have to declare that they want to be candidates now.

See, all nine of those people I just listed above have notified the Secretary of State in writing that they wanted to be a write-in candidate and published their intention in their local newspaper. Not really so hard, is it? However, it's certainly more than any superhero can be expected to do between catching purse-snatchers and exposing crooked cops.

Sure, despite the fact that Superman is technically ineligible for the office (he was born on foreign soil, you know), he's still way over-qualified for the position (fighting the "never ending battle for truth, justice, and the American Way" nonstop for 80 years!) but can't accept your protest write-in vote without publicly begging for it.

Way to go, America. Once you start to eliminate the candidates of value, you end up with a turd sandwich or a giant douche in the White House. Or worse. 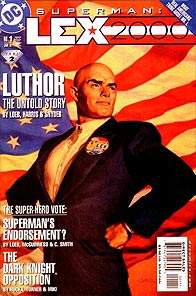 Someone somewhere is going to have to explain to me why people have been standing in lines for hours in order to vote early. I've asked everyone I know, and no one can plausibly explain it. Some people must have too much time on their hands. The line here in Coweta County has been around the block downtown all day. For over two weeks! How can there be more people voting in my county than can even read?

Though Georgia state law mandates businesses to allow a 2-hour window for their employees to vote on election day, I've never heard of anyone exceeding that time. But now I'm frequently hearing news reports quote a waiting time in some counties exceeding 4 hours for early voting lines! So by choosing to go early, these voters are wasting their free time to do something that they law shelters them to take off from work to do. If I was to wait in any line for more than even 15 minutes, there'd have to be a pretty kick-ass roller coaster at the end of that line.

Clearly, this Presidential election will have record-breaking voter turnout. And to think: our next President will likely be chosen by people who are willing to stand in long lines in order to do something that they could just as easily have done via mail-in ballot from the comfort of their living rooms.

I don't comment on politics often, mainly because I figure it's a mug's game: anyone running for President probably isn't worth electing President. However, yesterday the Hon. Hillary Clinton defended her refusal to withdraw from the all-but-over race for the Democratic Party nomination by explaining that she was still in the running just in case something should happen to her opponent:

Now, just for a second, let's assume that she wasn't hinting that her opponent, the Hon. Barrack Obama, will be assassinated on the way to the nomination. What is the chance that if Obama is removed from the race she wouldn't be the party nominee even if she willingly stepped aside? Hmm? (Historical note: RFK was in second place in his party's delegate counts when he was slain, and it is unlikely that he would have received the party nomination should he have survived.)

While it is too much to hope that the Clintons will be learning a lesson from this (depending on what your definition of the word "is" is), it's not too late for you, the reader of this blog, to take away a little something. As Aesop might say, the stubborn donkey that stays late in the field is likely to contract hoof-in-mouth disease.

(On a tangentially related aside, what's the chance that Ted Kennedy's recently revealed malignant brain tumor is the result of a conspiracy? I'd hate to see Teddy left out of the family legacy, after all. Poor guy might actually die from >shudder< natural causes.)

Think about it. A child (too young even to see Iron Man without adult supervision) has pledged all of his assets to invest in the political campaign of a candidate that has already passed the point of mathematical elimination from the race (unless the Democratic party loses its senses and ignores the popular vote). He's pledging towards a campaign that has simultaneously decried excessive government spending and unbalanced budgets while running up more than $20 million in campaign debt in the past year (does anyone remember Brewster's Millions?). And, here's the kicker, he's pledging the efforts of his closet-clearing fundraising, all $400, to the campaign for a multi-millionaire.

Who are the parents that would let their child do this? When I was 11, I worked odd jobs to earn enough to buy Optimus Prime. I wasn't concerned with helping Michael Dukakis overcome stupid tank photo-ops.

The boy was quoted by the Associated Press: "I think she can do just like Bill Clinton did in the '90s and we can have a good economy,'' he says. "I think the majority of people around here are struggling due to the economy. And she can get us out of the war.'' When the 1990s ended, this boy was no more than 4 years old. The only war he's familiar with is a card game.

I've long feared that American politics was a play put on for the naive. What's more naive than an 11-year old boy who thinks that Hillary Clinton can end a war? I sure hope that this story is fiction. I'd hate to "think of the children" and be faced with such distressing facts.

I think my main problem with the system is that politicians keep squabbling over the same inane trivialities (gay marriage, giant border fences) that are designed to deflect our attention from the countries bigger problems, namely corrupt politicians. 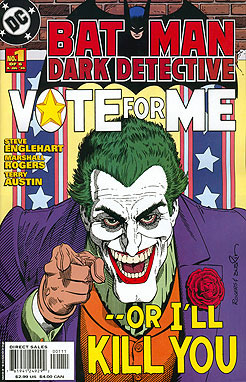 I'm not saying I'll never vote again; I just need something worthwhile to get me off my ass. For example, if I was given the option of voting to kill Judd Winick, I'd be right there.