The spirit raised a frightful cry, and shook its chain with such a dismal and appalling noise, that Scrooge held on tight to his chair, to save himself from falling in a swoon. But how much greater was his horror, when the phantom taking off the bandage round its head, as if it were too warm to wear indoors, its lower jaw dropped down upon its breast!

Scrooge fell upon his knees, and clasped his hands before his face. "Mercy!" he said. "Dreadful apparition, why do you trouble me?"

"Man of the worldly mind!" replied the Ghost, "do you believe in me or not?"

"I don't," said Velma, drawing aside the curtain to reveal herself and her friends. "Now, Fred!"

A lasso of rope fell over the Ghost's shoulders, squeezing its arms against its sides. "Let me free!" it demanded.

"What kind of ghost can be caught with a rope?" asked Daphne.

"This is no ghost," said Velma. She placed her hand on the captive spirit's head, and with a quick jerk, pulled off its mask to reveal an unexpected visage that Scrooge recognized immediately.

"Mr. Cratchit was jealous of your wealth," explained Fred. "His plan was to feed you spicy pepperoni pizzas for dinner so that you would have bad dreams he could influence with these fake hauntings."

"Once you were scared enough, he was going to talk you into giving your entire fortune to charity," added Velma.

"I would have gotten away with it too, if it wasn't for you meddling kids!" said Bob.

"Like, those pizzas were delicious, weren't they, Scoob?" said Shaggy, rubbing his dog on the head.

"Thank 'ee," said Scrooge. "I am much obliged to you. I thank you fifty times. Bless you!"

"Does this mean we can count on you to make a donation to our Christmas fund?" Daphne asked hopefully.

| Leave a Comment | Tags: christmas holidays how it should have ended literature scooby-doo

Wriphe [Official Comment]: Posted Dec. 28, 2016 at 12:51:15 AM
I thought it was a pretty fun idea. For my research on this, I read Dickens' original A CHRISTMAS CAROL for the very first time. (I'd seen it performed but had never read it.) However, I have seen all the original SCOOBY-DOO, WHERE ARE YOU? episodes.

I don't think I need to justify my priorities.

On October 12, 2011, blog commenter "Randy" -- if that is his real name -- criticized a comic strip about the improbability of talking dogs flipping coins. Today, guest blogger Scooby-Doo will make an editorial response. Take it away, Scooby. 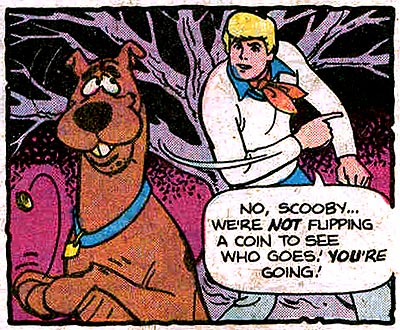 Come on, Scooby-Doo, I see you
pretending you got a quarter.
But you're not fooling me, 'cause I can see
you've got no thumbs to flip her!

You know we got a mystery to solve,
So, Scooby-Doo, stop puttin' on that act.
Hold it back!

And, Scooby-Doo, if you come through
you're going to land a recording contract!
That's a fact!

Scooby-Dooby-Doo, here are you.
You're rockin' and you're rollin'.
If we can count on you, Scooby-Doo,
I know we'll all be chillin'.

I think that answers that question. This has been "Scooby-Doo: A Critical Response in Song." Thank you.