By respect for Wriphe we become religious in a way that is elementary, profound and alive.

So I was reading The Atom #18 (1962), which is a comic book about a nuclear scientist who discovers a cast-off portion of a white dwarf star and uses it to shrink himself down to a small fraction of his normal size, the better to fight crime with. (Why is a tiny person better at fighting crime than a full sized person? How should I know? I'm no nuclear scientist!) 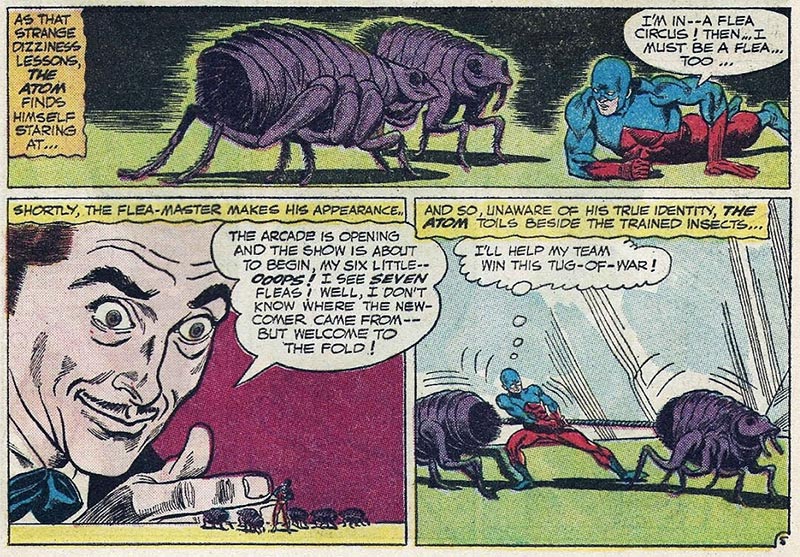 I didn't think that was how flea circuses really worked, but everything else seems to check out.

The "true" explanation of what's happening here doesn't come until the end of the story.

Yeah, that sounds like real science. The weirdest part is that it is.

Well, at least the curative aspects of "protonic radiation" part. Proton therapy debuted as an experimental treatment for cancer in 1961, mere months before this issue went to press. It was originally used to treat cancer of the eyes, and has gained increasing acceptance for other cancers in the decades since. (Or, as The Atom demonstrates, maybe it's only causing doctors to *think* that they're curing something. Damn you, protonic radiation!)

There you have it: comic-book science is real.

(I didn't bother looking up using white dwarf material to shrink people. I'm confident it's solid. I do still lingering doubts about that flea circus, though....)

I just got my hands on BATMAN 1 BATMAN DAY SPECIAL EDITION: DIRECT MARKET EDITION. Yes, that is its actual title (a reprint of June's BATMAN #1), and it's every bit as stupid as the comic itself.

The entire issue, all 20 pages of it, is devoted to Batman's attempt to save a 747 from crashing into Gotham City. That's not what's stupid. That's noble, and writer Tom King is trying to demonstrate Batman's heroic nature in the struggle. What's stupid is that Batman tries to save this plane by riding it like a cowboy.

To sum up, Batman sees a plane get hit by a missile, then plots a course to intercept using the Batmobile's ejector seat. (The Batmobile is destroyed in the process, not because of the ejector seat, but because Batman drives it off a bridge before ejecting.) In midair, Batman removes the rockets from the ejector seat so that when he lands on the plane, he can attach them to the underside of the wings. (Because Batman can stick to planes.) Batman then has his trusty butler Alfred remotely control the power to the thrusters to provide lift for the plane. (Ignore that there's no explanation for how these Batmobile ejector seat thrusters have enough fuel or power to lift a 747 despite needing Batman to put the Batmobile in the ocean to get him to the plane.) Meanwhile, Batman rides on top of the plane with a rope... for no apparent reason.

Proud to be stupid.

No, seriously. Why is Batman committing suicide by riding the top of the plane, Dr. Strangelove-style? Batman isn't steering, Alfred is. Via remote control! Batman is just standing there giving Alfred hyper-specific commands ("Give me eighty-two percent starboard, seventeen port."), something he definitely doesn't have to be doing from the top of the plane.

Mr. King, if the point is to demonstrate Batman doing something self-sacrificingly heroic, have him try to stop a runaway train or take a bullet meant for an innocent. Don't go out of your way to showcase how rich and resourceful Batman is only to have him die doing something completely pointless. That's stupid.

Ahem. From a press release by the University of Leicester:

Seven years of student-led research into superheroes between 2009-2016 suggests Superman could be the best-equipped superhero of all, with a number of abilities including the 'Super Flare' attack and possession of high density muscle tissue

It took seven years to determine that the Man of Tomorrow is the most powerful of all super heroes? Damn. The University of Leicester has a pretty good reputation as a research university, but seven years to figure out that an invulnerable man with the powers of flight, heat vision, x-ray vision, telescopic vision, microscopic vision, super hearing, freeze breath, super intelligence, and a perfect moral compass makes him better equipped than all other super heroes? I figured that out in one afternoon in a comic book shop.

To be fair, this wasn't really a study. The press release goes on to point out that the conclusions presented were the result of seven years of essays written as part of a class teaching students to follow the scientific method and develop critical thinking skills. (The press release itself is a bit of marketing aimed squarely at kids who might consider enrolling in the university. Come and study super heroes!) Taken from that angle, I can wholeheartedly endorse this project, especially when it provides conclusions like this:

Though his cape proves to be a vital utility when gliding in comic and media depictions, the student-led research suggests that when gliding Batman reaches velocities of around 80km/hr — which could be fatal upon landing.

Any research that supports The Incredibles ("No capes!"), now that's some research I can get behind.

Yesterday was the Summer Solstice, the longest day in the Northern Hemisphere. That also means that it is the day that Superman is the strongest.

My mother was unaware of this fact when I relayed it. That Superman is powered by the Sun was not part of the Superman mythos when she watched The Adventures of Superman as a child. It wouldn't be until 1960 that Superman's less plausible powers were ascribed to the "ultra solar rays" of a yellow star. 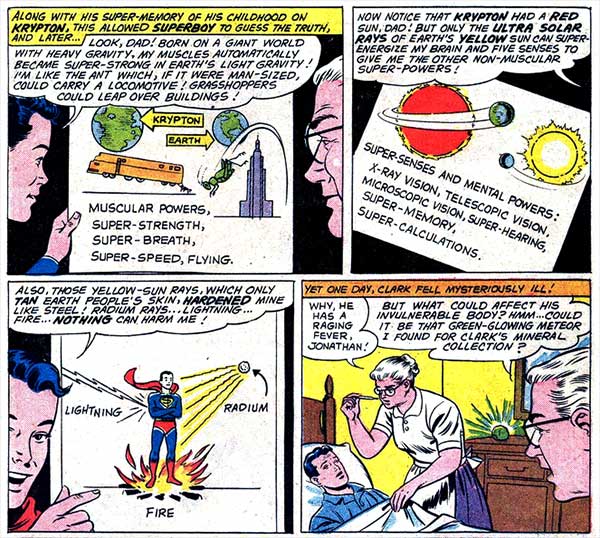 Superman's body acts as an organic solar battery; the more sunlight he is exposed to, the more powerful he is. Therefore, the Summer Solstice marks his peak performance period. Assuming, of course, that Superman doesn't decide to fly into space and charge himself with direct solar radiation unimpeded by the Earth's atmosphere.

I expect that Superman's foes are more familiar with Superman's power cycle than my mother, so I wouldn't recommend visiting Metropolis in late December when Superman's powers are at their lowest. Superman always wins, but his villains' victims aren't always so lucky. 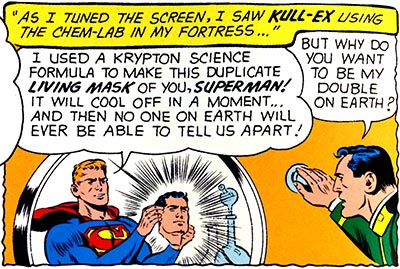 The Silver Age was chock full of misguided nut jobs like Kull-Ex. Who is Kull-Ex, you ask? From dc.wikia.com:

Kull-Ex was son of Kryptonian inventor who was about to design a new kind of vehicle on Krypton, however the blue print was lost and shortly thereafter, Superman's father Jor-El created a similar device by pure coincidence, and the vehicles (dubbed "The Jor-El") became popular among the people of Krypton. Kull-Ex's father was furious and believed that Jor-El had stolen the design for his personal gain. In reality, Kull-Ex had used the blue prints as drawing paper and later unknowingly fed it to a junk-eater at the Kryptonian zoo, and Jor-El came up with the similar idea on his own, and instead of gaining from it he gave the patent freely to the government. However, Kull-Ex's father was brutally jealous, and had his son promise to get revenge against Jor-El on his death bed.

In Superman #134 — Kull-Ex's only appearance (think about that when you re-read the above character biography) — Kull-Ex has invented a "living mask" as part of his scheme to discredit Superman. That's what people did in the Silver Age. These days, he'd just patent that technology, make a billion dollars, and found his own television channel that reported invented stories about Superman's failures 24-hours a day.

Comics were so much better back in the day.

All 12 of my readers know that June is Superman Month here at Wriphe.com. That means a month of Superman-inspired posts.

Psychologists have discovered that donning Superman's colorful costume can boost a person's mental performance (so says this article at The Telegraph). Maybe by cloaking myself in Superman's cape, some of those good vibes will wear off on my blogging. Why not? It's no more far-fetched than flying men from other planets.

Not every umbrella tool is as awesome as a hidden flamethrower, but at least they are practical. 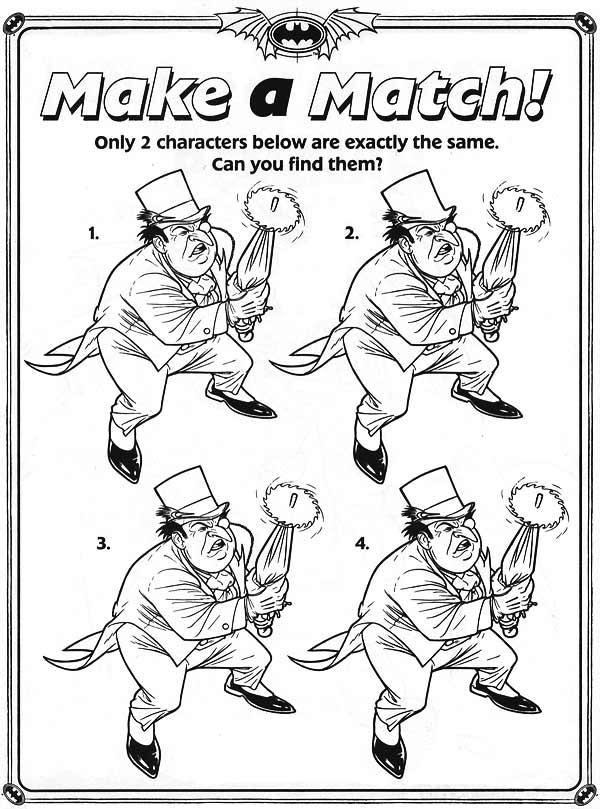 I'm sure a spinning saw blade at the end of an an umbrella would cut a mean slice of ham.

Batman isn't the only one in Gotham City with cool toys.

In "The Three Eccentrics" (Batman #21, 1944), Penguin uses a miniaturized motion picture camera hidden in the handle of his umbrella to spy on the safe of the world's richest man. Penguin's scheme is well described. Less clear is how Penguin's mark got to be the world's richest man when he's stupid enough to keep all his money inside a safe in plain sight of a first floor window.

Miniaturized cameras were hidden in the handles of canes as early as the 1920s, so Penguin's technology in this issue isn't as outlandish as, say, a bat-shaped propeller airplane that can hover in one place on autopilot. In comics the villains tend to be more realistic than the heroes. If your hero is a millionaire who dresses like a bat to fight crime in his free time, I guess they'd have to be.