Symbols are the imaginative signposts of Wriphe.

The arrival of the Olympics sort of killed my momentum with movies. Watching occasionally-live sports for 8 hours a day is surprisingly addictive. Personally, I blame Michael Phelps, who seems to be swimming every night in his quest to win more medals than anyone else in the history of the world. At the rate he's collecting precious metals, I figure he must be stockpiling for the coming apocalypse.

Anyway, let's just go ahead and get the rest of July out of the way. Enjoy it while it lasts. If the Olympics are any indication, movie-watching will come to a complete halt when football season finally arrives next month.

199. DOA: Dead or Alive (2006)
Maybe this is the best video game movie ever made. Watching real sexy girls fight is far more entertaining than watching computer-generated girls fight. And not a zombie in sight!

200. Comic-Con Episode IV: A Fan's Hope (2011)
This Morgan Spurlock documentary about Comic Con spends a lot of time emphasizing that the one-time king of comic book conventions is really now all about television and movies. That's no secret to those of us who have been paying attention for years, and is the main reason that I no longer want to attend the Con.

201. The Big Trees (1952)
Kirk Douglas plays a manipulative businessman in this movie, more the type of role that his son, Micheal, specializes in. They laugh alike, they walk alike, at times they even talk alike! What a crazy pair!

202. The Gamma People (1956)
This little British sci-fi flick takes place in a small, Eastern European kingdom that reminded me of the setting for Gymkata. Forget Total Recall; we're far overdue for a remake Gymkata!

In the past week, I've heard how Phelps has overcome a childhood broken home and a crippling illness (ADHD) to become the greatest swimmer Olympian human being in the history of mankind. Did I say history of mankind? I meant ever. Anywhere. In the Universe. Who needs to walk on water when you can swim through it so fast? He even wins events despite his water-tight goggles filling with water. It must be a miracle.

On NBC, the anchors have coined such phrases as "an achievement of Phelpsian proportions" (in regards to the women's diving competition) while praising Phelps in a manner reminiscent of some religion based in Rome, including asking whether we weren't "underestimating Phelps amid all the hype." The most devoted of Phelps' Phollowers (I believe they call themselves Phelps Phans) is Chris Collinsworth, who moments after the completion of the 400 medley relay told gold medal-winner Jason Lezak that his greatest claim to fame would be helping Phelps win the relay events. Meanwhile, ESPN says that Phelps is the savior of the Olympic Games. ESPN wouldn't lie to me, would it? 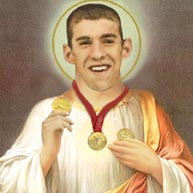 All right, fine. Sign me up. If Michael Phelps is the greatest thing since Jesus, I want on board. I'll watch him as The Bachelor. I'll buy the products that the first mom, Debbie Phelps, the Official Mother of the Olympic Games, pitches for Johnson's. Heck, I'll even dash out and buy a pair of tighter-than-skin Speedos to wear while talking on my AT&T Wireless Phone on historic Ellis Island. That's what the Olympics are all about, right?

By the way, I just heard that Phelps' urine cures cancer. Maybe that's why everyone seems to have his dick in their mouth.

Great news! The Olympics are now underway in China. Why is that great news? Because that means that in 3 weeks they'll be over, and I won't be bothered by them anymore.

Maybe I'm a cynic ("maybe"?), but it seems to me that a giant competition feverishly promoted and sponsored by multi-national corporate conglomerates where competitors are aligned by arbitrary political entities isn't really going to give me the best product in regards to quality. It's not that I mind that the games are driven by the odd coupling of capitalism and jingoism, I just wish they'd be more honest about it. I don't think it's possible to build a better world through bullshit.

In the past few days I've spent many hours learning to solve a Rubik's Cube. (Don't have your own? Play with a virtual cube online. Thank you internet!) I'm not interested in solving for speed, but I would like to be able to pick a scrambled Cube up and solve it. I'm not quite there yet.