There are forces in Wriphe working for you and against you.

I've seen pictures of my younger self posed in pajamas in front of the refrigerator, but I have distinct memories of only three New Year's Eves in my life.

The first was spent at my uncle's mother's house with my older cousins. It was the 80s, and I barely made it to midnight to drink my non-alcoholic cider before I fell asleep. I probably wasn't 10 years old, but I do remember feeling, perhaps for the first time, like I was a real adult.

The second was while working as a waiter at Chili's in the mid-90s. The restaurant closed at midnight that evening, so the manager on duty brought some champagne for all of us who had to close (my favorite shift). I didn't finish my glass. It wasn't the first bubbly I'd had, but it did cement my opinion that I do not like it. Alcohol isn't my bag, baby.

The third was twenty years ago tonight: New Year's Eve 1999. Mom came from Scottsdale to Athens, and we had dinner at the 24-hour Shoney's restaurant Trey was working in. He had the overnight shift, so Mom and I went back to the house (on Big Oak Circle) to watch fireworks and waited for the Y2K bug to end civilization as we knew it. Good times.

Half a lifetime later, I'm planning on celebrating the calendar change tonight with my favorite pastime: playing video games. I probably won't be making any indelible memories, but I will start the new year while having a good time. Isn't that what New Year's Eve is really about?

For Christmas, I gave my mother the gift you give someone who has everything: a cold.

Maybe she'll forgive me by next Christmas.

Friend Randy complained when my last movie post promised eleven movies and only delivered five. I correct that omission here.

198. (1637.) Terms of Endearment (1983)
Several times during the movie (which is surprisingly more of a comedy than a tragedy), I asked myself "Why am I still watching this." I don't have an answer. The acting is good, yes (in fact, the cast is phenomenal), but the subject matter really isn't that engaging to me. Whatever. Just not my thing.

Except for the Coke. 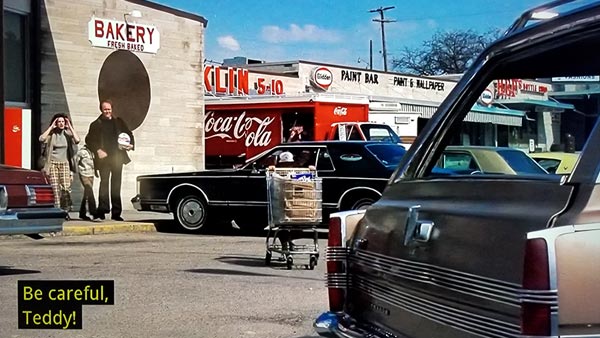 Spoiler: Teddy is not careful.

199. (1638.) Smithereens (1982)
More my thing, at least in spirit. The actual story — a girl constantly making the wrong decisions in life — wasn't particularly captivating for a whole two hours, but the "indie" (read: cheap) filmmaking style was immersive, like these were real, heavily flawed, people. Felt like a Warhol film.

201. (1640.) Downton Abbey (2019)
I told Mom I wanted to go to the movies, and she said she wanted to go, too, so long as we saw this. So we did. I'd never seen an episode and can't believe they are all as good as the film was. Mom assures me they are. I was particularly thankful for the recap the theater ran in front of the actual film so that I had at least an inkling of who the houseful of players were. The most impressive thing about the plot is the incredibly low-stakes. There have been many, many dramas that have managed to do far less with much more.

(Sidenote: Mom and I weren't the only two in attendance. A couple of rows in front of us were three people who, it turned out, were watching the film again in anticipation of a vacation to visit the filming location, Highclere Castle.)

202. (1641.) In a Lonely Place (1950)
Is Bogart a murderer or just a bad guy? Is he aware of his own flaws? Is he deserving of love? Overall, a great noir movie. (There's a running gag in the movie about Bogart's screenwriter character having not read the book he's turning into a movie. Apparently, that was the case for this movie and the book it's based on. Meta!)

203. (1642.) Image Makers: The Adventures of America's Pioneer Cinematographers (2019)
TCM closed their month-long salute to cinematographers with this documentary highlighting the accomplishments of some of the best film has to offer. As a film buff, I found it engrossing, especially the anecdotes about the early days of Hollywood.

November wasn't only about pies and movies!

When I was a kid, my favorite Christmas decoration was a pair of legs painted on plywood mounted to the top of a chimney. They were connected to a windshield wiper motor and kicked, like Santa was stuck face down. It was a good gag.

Cue earlier last month when Mom said that she wanted a new Christmas yard decoration. She was looking at lit Santa Claus blow molds like she had on her door as a child, but when she tried to convey the idea, all I could think of were those kicking legs.

I didn't manage the same level of technical innovation, but I think I got the nostalgia angle right. 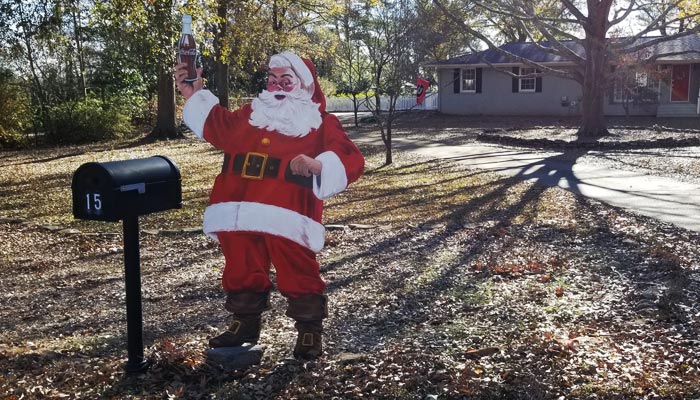 Kind of looks like a bit of Photoshop there, doesn't it? Here it is a little closer.

My next door neighbor seems to like it. He's already asked where we bought it so that he could get one of his own. Mom had to let him down easy. This Santa stands alone. 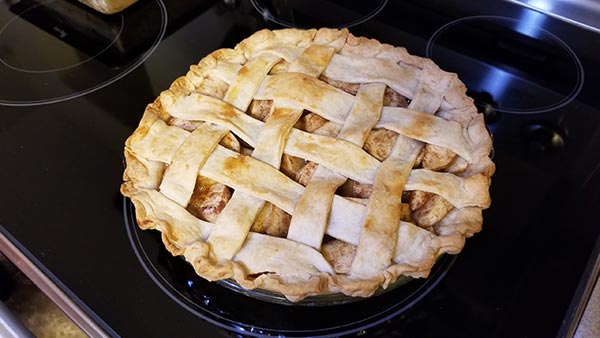 Mom got a deal on some Day of the Dead hand towels at TJ Maxx, so she decided we'd be decorating in that style for Halloween this year.

This is the door hanger I made for her.

Cultural appropriation at its finest!

The forecast was 57° and rain. I asked Mom, and she declined to attend. I asked seven more people, and they all had better things to do. I went alone. I should have listened to what they were trying to tell me.

As forecast, the game was very cold, and very wet. So wet, in fact, that the Athletic Department decided not to allow any bands on the field, which made for a very unusual pre-game with no band welcoming the players onto the field and an equally odd Homecoming halftime, where the homecoming court was seen only on the video board in still photographs (taken on a sunnier day).

The football was as bad as the weather. There were 10 punts in the first half alone. (Six of those drives were 3-and-outs.) Georgia's strategy appeared to be "wait until Kentucky makes a mistake." It did work eventually when Kentucky badly shanked a punt and allowed Georgia to score on the following play. Congratulations, Georgia, but don't expect that plan to work in two weeks against Florida.

I was not prepared for the amount of rain. I lasted only slightly longer than Kentucky did. I left in the fourth quarter after Georgia finally shut the door, making a goal line stand to break Kentucky's spirit. I paused on my way back to the car to take one last look back just as Georgia scored their third touchdown. Final score: Kentucky 0, UGA 21.

The first evidence I saw that things were going to go poorly was at the start of the game when the three guys sitting behind me correctly predicted Georgia's playcalling on the first three downs. And they didn't just call runs and passes. They accurately predicted blocking assignments and routes. If the guys in the stands can do it, it should come as no surprise that the opposing coaches can do it, too. And they did. (Although, how hard is it to predict "run up the middle, run up the middle, pass to the outside" when it is repeated for 4 quarters and two overtimes of play?) 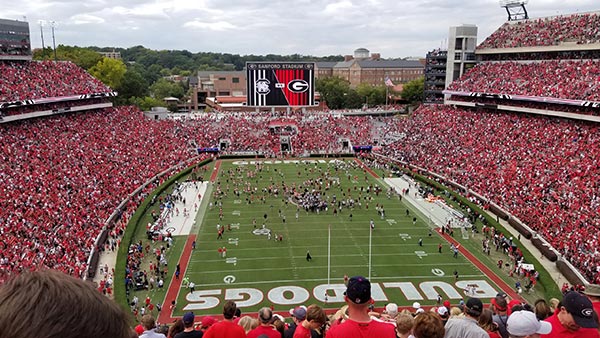 The picture above is of the South Carolina players celebrating at midfield and tearing branches off the famed hedges after their win. Some Georgia fans were up and arms about this, but that's what underdog visiting teams do when they beat #3 ranked Georgia. Or, as in this case, #3 ranked Georgia beat itself.

There was a lot of blame to go around in this 20-17 loss in double overtime, but quarterback Jake Fromm does deserve special mention in no small part because he's typically been so good. He played so badly today — missing open receivers, throwing three interceptions, and fumbling once — I have to wonder what recently went wrong in his life. Dumped by his girlfriend? Dead dog? Payoff? Did no one tell Jake the cautionary tale of Quincy Carter? Bad games against South Carolina can ruin promising careers, Jake. 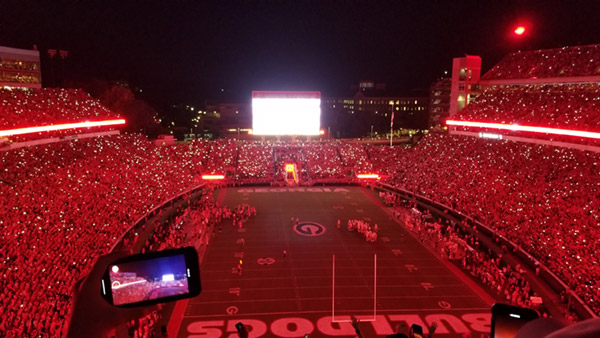