If Wriphe has taught me anything it's that 95% of the people are always wrong.

Eddie Murphy's giant head has been touring America promoting the star's latest movie, Meet Dave. It's a pretty good looking sculpture of the star of The Adventures of Pluto Nash and The Haunted Mansion, as it lacks any pores or blemishes, unlike the real Murphy. Lemuel Gulliver pointed out that from his diminutive point of view, the Brobdingnagians had terrible skin with seemingly gigantic pores, and the microscopic vermin that lived on them were plainly visible to him. No doubt Eddie Murphy, one of the highest grossing stars in the world thanks to such films as Metro and Holy Man, would never suffer the indignity of appearing as something other than perfect. 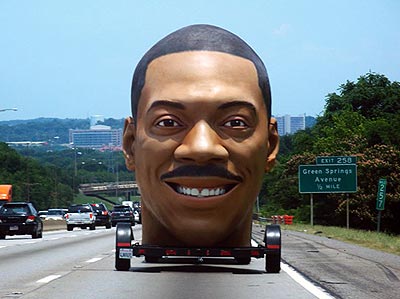 Unfortunately, this reproduction lacks the animation of an audio-animatronic Jason Taylor or a marionette of the Royal de Luxe. You'd think an actor animated enough to play every role possible in each movie in which he appears would be a perfect opportunity to create a larger-than-life animated prop. But then Hollywood never does anything all-the-way when half-assed will do just as well. In fact, this statue of Life and I Spy star Eddie Murphy has more in common with the statue of the Jolly Green Giant in Blue Earth, Minnesota, than anything else: they're both big, colorful, and created just to sell me something.

(All kidding aside, the sculpture was created by a fellow named Jim McPherson at Gentle Giant Studios. He's posted more pictures similar to the one above here. Fantastic.)

As I mentioned 2 days ago, the Miami Dolphins will be playing the New York Giants in London this weekend. I just took a look at NFLLondon2007.com, the official website of the game. The first three of six players highlighted to introduce the Dolphins to an unfamiliar British crowd are, in order, Trent Green, Ronnie Brown, and Chris Chambers, none of whom will be playing for the Dolphins come Sunday. (Green and Brown are out for the season with injuries and Chambers was traded last week.) Number four on the list is Ted Ginn, Jr, who has only 6 catches (and zero touchdowns) through the first seven weeks of the season. Wait'll they get a load of us! 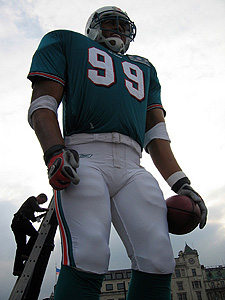 On the upside, the 5th name on the list is Jason Taylor, the 2006 NFL Defensive Player of the Year and NFL's all-time leader in touchdowns scored by a defensive lineman. To promote the game in London, the NFL has constructed a 26-feet tall animatronic Jason Taylor -- "the worlds largest ever animatronic human" -- dubbed "Big JT." It looks TOTALLY BADASS. No doubt it will be shown on TV this weekend. You can see a brief video of Big JT in action on NFLUK.com. (Note that in the video, when asked to predict the game's winning team, Christian Slater, star of Kuffs, says, "Well, I grew up in New York so, uh, I've always been, uh, uh, a huge Giants and Jets fan, so, uh, I'm just excited to be here." Eloquent. And pointless, just like Slater's career.) The NFL's official pics are available in a slideshow at MiamiDolphins.com. If you'd prefer a longer, more boring video of the robot in action (but without Christian Slater), check out YouTube. Or, if you're into this sort of thing (as I am), check out the website of the SFX company that made the titan, Artem, LTD.