Looking at yourself in a mirror isn't exactly a study of Wriphe.

As you may recall, I destroyed Mom's 2012 Kia Optima back at the beginning of August. Replacing it has turned out to be a bit of an uphill journey.

After a month of insurance negotiations and car shopping, Mom picked out a 2017 Nissan Murano the first weekend in September. (She was looking at a model with a heated steering wheel, and I talked her into saving $5000 by buying a slightly different car. As you will see, I should have kept my mouth shut.)

The Murano had all the safety features she wanted plus luxury to spare. Unfortunately, it also had problems. We only had it for two weeks when I discovered rust under the dashboard (and under the driver's seat, and behind the rear seats, and around the spare tire . . .). It took Nissan another month to declare the problem a factory defect. Eventually, Mom negotiated a buyback under Georgia's Lemon Law. Goodbye, sweet Murano.

(On a related note, we're selling a set of black WeatherTech® floor mats for a 2017 Murano, if anyone is in the market.)

Mom started her car search over from the beginning. She still wanted safety features, but she never got used to driving such a large SUV. So she got something smaller instead. Introducing Mom's 2018 Ford Escape! 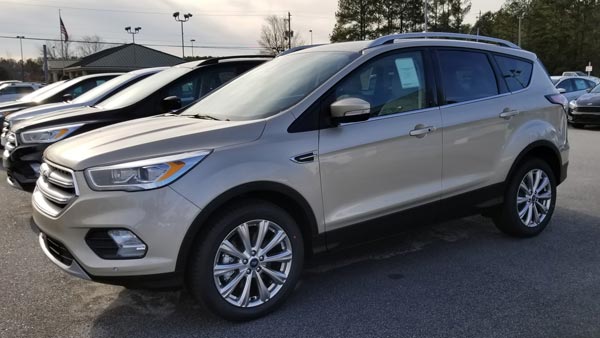 I promise you, I've been over the whole car with a magnifying glass. There's a scratch on the interior of the driver's side headlight cover, but I can't find anything else wrong with it. It certainly isn't rusted. (And it does have a heated steering wheel.)

The Escape only has a three-year warranty on the interior electronics, so if I'm going to ruin this one, I need to act fast. I'll keep you posted.

Sometimes posting to a blog is like being in a food fight: throw enough pie and someone's GOT to get hit in the face. (This column is going Larry King style, baby!)