It is always surprising how small a part of Wriphe is taken up by meaningful moments.

Disappointment is a side effect of expectations.

I liked Executive Producer Mike Richards as Jeopardy! MC. I thought he was among the best of the "guest hosts" who have been substituting for the late, great Alex Trebek. I wanted Richards to have the job permanently.

But Richards (or his bosses) made a mistake. When they told the general public that the new host would be "one of the guest hosts," that set the expectation in the minds of the public that the job would go to the host they personally liked best. Hence the widespread disappointment from LeVar Burton's legion of well-earned fans when the least known (but best connected — and probably also the cheapest) of all the temporary hosts got the gig.

Thus the door was opened for the inevitable amateur yellow journalists digging up every negative thing Richards has done or said in his 46 years on the planet. Sadly, not everyone can be as perfect a person as Alex Trebek.

If any of Richards' innumerable sins (mostly misogyny & bad jokes) is truly unpardonable, it was that as Executive Producer he had the inside track on selecting and auditioning hosts. Even if he didn't have the final say himself, he should have known that when you're in the race, you can't also be the referee. Americans expect their game shows to be fair, and they're always disappointed when they aren't.

Alex Trebek is on medical leave from Jeopardy! as he recovers from what he called a "slight medical problem." The rest of us call it brain surgery! 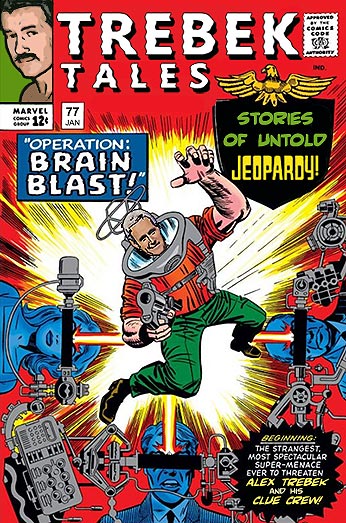 Apparently, Trebek was standing on his toilet and hanging a clock. The porcelain was wet. He slipped and hit his head on the sink. When he came to, he had blood clots in his brain! (That's what I heard, anyway.)

Fortunately for us all, Trebek announced he's making a full recovery and will soon be back on set giving answers to questions no one has asked yet. I hope by then, they've covered his podium with bubble wrap.

I'm not ready for a world without the exploits of one George Alexander Trebek, Member of the Order of Canada.

Those who warned that 2012 would see the end of the world may have been more right than I would have guessed. The world dodged a bullet last week, as Alex Trebek had a heart attack!

Reports say it was a minor heart attack, and he'll be back at work in time to start filming next season's Jeopardy! episodes on schedule. But I consider this a wake-up call. It's time for the world to pull its head out of its ass and put real effort into Trebek conservation.

We shouldn't selfishly consume all of Trebek and deny future generations access to his uniquely endearing smugness. At the very least, we owe it to our children to ensure that there will be Trebek around for years to come!

I call for America's politicians to put aside petty squabbles about universal healthcare and focus on the health of one man that really matters. If we work together, we can ensure a brighter future for all mankind, especially Alex Trebek.*

*Paid for by the Committee To Ensure Eternal Global Jeopardy!

Earlier this week, three years to the day since I ran a blog post substituting him as the comic book hero Sub-Mariner, Alex Trebek injured both of his legs -- including a torn Achilles tendon -- while running down a burgler. Coincidence? (It was also 5 days after his 71st birthday.)

There are two ways to approach this story. Either heroic Alex Trebek was foiled during his valiant attempt to apprehend a crafty purloiner, or septuagenarian Alex Trebek was injured during a bungled try at catching a petty crook. I'm pretty sure you know where I stand on this issue. 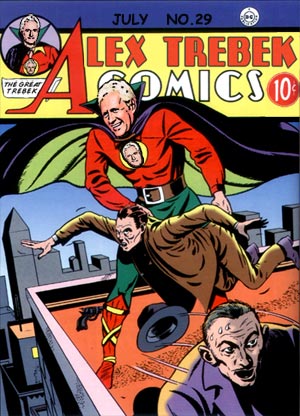 I pity the poor contestants in next year's Jeopardy! episodes. "Oh, you ran a marathon? Well, I was in a footrace last year to catch criminals." "Bone marrow transplant, you say? During the surgery to repair my torn ACL, I distracted myself from the pain by giving the surgeon French elocution lessons." "You solved the national debt crisis? When I was in court for burglery, not only was I the expert witness, I was also the arresting officer, bailiff, and court stenographer."

That burgler must not have know from whom she was stealing. Alex Trebek is a national treasure.