The 2018 Winter Olympic Games may have come and gone, but they didn't stop the movie watching. Here's batch 2 for February.

26. (1255.) The Foot Fist Way (2006)
The movie that made Danny McBride a star! Actually, I think that may have been Pineapple Express, but this was earlier. It's exactly the sense of humor you've come to expect from McBride, so if you generally think his movies/TV shows are funny, here's some more. (Personally, I waffle. I think McBride's persona is entertaining in ensemble casts, but I can only take so much of his signature self-absorbed abrasiveness in one sitting.)

27. (1256.) Inside Out (2015)
Mom loved this movie, but I was only lukewarm. Too much touchy-feely for Walter, I suspect. The only time I was really captivated was when we got a look inside other people's heads at their control crews. To clarify: good movie well made, just not to my tastes.

28. (1257.) Congratulations, It's a Boy! (1971)
Bill Bixby plays the antithesis of his usual, responsible adult as a spoiled playboy discovering a grown son he didn't know he had. (Mom named the boy after Bixby's character, but told the son that dad was dead. That's some great parenting.) There is a subplot involving Bixby's overbearing parents' mistakenly thinking that their son and their grandson are in a homosexual relationship, but that's too little too late to save an otherwise dull affair.

29. (1258.) Rapture-Palooza (2013)
I don't usually like end-of-the-world movies, but this slapstick comedy wasn't so bad, perhaps because darling Anna Kendrick was there cushion the blow that everyone's living in Hell on Earth.

30. (1259.) The Ultimate Warrior (1975)
This is not about the WWF superstar wrestler but Yul Brynner's rather boring attempt to save Max von Sydow's post-apocalyptic commune. Yawn. (It could have used some Anna Kendrick.)

31. (1260.) Meet Wally Sparks (1997)
Golly, I remember this movie getting a lot of bad press on initial release. I can understand why, although if you're attending a Rodney Dangerfield comedy, you shouldn't be expecting Citizen Kane. It's not worse than any Chris Farley or Adam Sandler movie of the same era. Plus, in part because the movie spends most of its time lampooning the Southern manners of the citizens of the Great State of Georgia, it's got Coke! 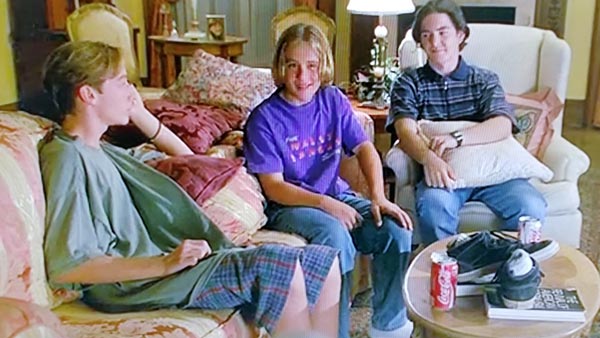 None of these kids is Wally Sparks.