The great object of Wriphe is sensation --
to feel that we exist, even though in pain.

October was a good month. I went on vacation and still had plenty of time for work. I made a few bucks.

November has so far been a bad month. Dentist says I have a cavity and mechanic says I have an oil leak. I've spent all my new bucks.

Not that I was disappointed. The exhibit was really quite good, despite its failure to align with my expectations. Turns out that there is some pretty good art featuring the Tuileries. Who knew?

However, marble sculptures and expressionist paintings failed to capture my mother's attention quite as well as an advertisement for another High exhibit: 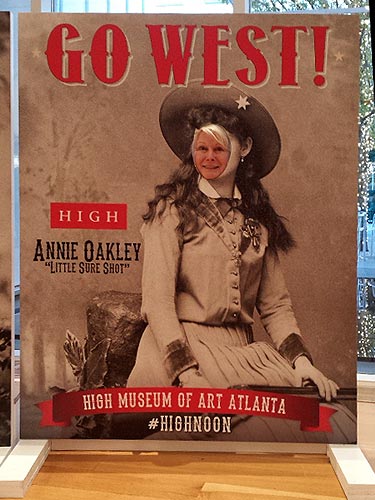 I can't express enough about how very excited she got about this photo opportunity.

183. (490.) Nosferatu (1922)
This is bram Stoker's Dracula in all but name. Modern movies have told the same story better than this German silent film, but the visuals are great, especially Max Shreck's portrayal of Count Orlok himself. (If you don't remember, I posted a jack o'lantern of Orlok last month here.)

185. (492.) Malone (1987)
Burt Reynolds playing a badass (with a really, really bad wig). Again. Reynolds helps a small town deal with a psychopathic political reactionary who is determined to... you know, I still have no idea what the bad guy's plan was. Die at Burt Reynold's hand, I guess. As a reward for Reynold's selfless action, he is given the local mechanic's teen-aged daughter. Awkward, awkward stuff.

186. (493.) The Gorgon (1964)
Hammer Horror at it's finest. Christopher Lee is teh highlight, but the only truly bad thing in this movie is the Gorgon itself. The snakes look like they've been pulled out a pop-up book. You could make a better effect with a rake and some tube socks.

187. (494.) Torn Curtain (1966)
Another Hitchcock spy thriller. This film has a lot going for it, including a brutal hand-to-hand sequence and a very entertaining climax. Something is not quite right here, though, and it's hard to put a finger on what that is. The middle of the movie is too empty, with too many moving parts that aren't doing anything. I know Paul Newman and Julie Andrews could do better. I've since read that Hitchcock had a problem with the script and the studio while working on this film. It certainly shows in the finished product.

188. (495.) Billy the Kid vs. Dracula (1966)
Back when there were drive-ins, you had to put something on the screen so kids could have an excuse to go make out in their cars. Therefore this.

189. (496.) The Mask of Fu Manchu (1932)
I cannot tell a lie: I watched this just for Myrna Loy, who plays a sadistic femme fatal with a dangerous sexual fetish. The movie is very entertaining while Boris Karloff is on screen, not so much otherwise. I should point out that this film is really super racist with it's Imperial British attitude against the Chinese. Truly cringeworthy in moments, especially the denouement.

190. (497.) Starman (1984)
One of the few John Carpenter-directed films I hadn't seen. (Now I think I'm down to Assault on Precinct 13 and The Fog.) It's very good. Jeff Bridges is fantastic as the unnamed title character. (Surprisingly, Mom decided that she loved this movie and has mentioned it several times since.)

191. (498.) Mark of the Vampire (1935)
While the run up to Halloween was filled with vampire horror movies, this was actually an intentionally misleading crime drama. If this movie had been made 70 years later, you wouldn't have been surprised to see M. Night Shyamalan's name on it. I'm still not sure if I feel cheated by it, but I think that I do.

No game has the happy, fraternal feel of Homecoming. It's always a lot of fun. Today marked the 40th anniversary of the alumni joining the active band on the field, and nearly 1,000 Redcoats were on the field together at halftime. It's good to know that no matter how old they are, no member of the Redcoats Marching Band can march in a straight line. 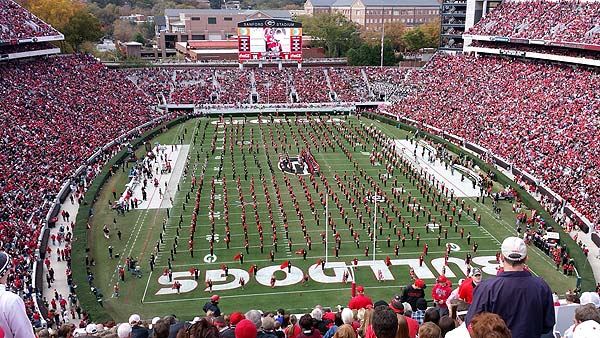 It was also good to have the halftime distraction, because the Bulldogs only led a 2-win Appalachian State team by eight points after the second quarter. App State took advantage of the Dawgs porous secondary early and owned the first quarter. It was a familiar sight for the Bulldogs this season. Fortunately, the Bulldogs made all the right changes at halftime and were ultimately the victors, 45-6.

For the record, kudos to Appalachian State fans. They traveled well and made a lot of noise for a school expected to lose by 31.5 points. Some SEC schools don't bring students or a band. App State brought both and more. It was a pleasure to host them.

Next week for Georgia: #9 Auburn. Gulp.

I guess now that even The Daily Show is talking about the Dolphins' locker room meltdown, I, as a Dolphins fan and frequent critic, should probably comment on it, too.

Was offensive tackle Jonathan Martin bullied? Was offensive guard Richie Incognito following orders when he called Martin racial slurs and extorted $15,000 from him? Did the Dolphins coaches really have no idea what was going on? I don't know. All I see is the second half of the 2013 season getting flushed down the toilet.

Also, I think I've mentioned before that I'm not impressed with Coach Philbin's ability at managing people. This is just more of the same. I've never been in an NFL locker room, but I find it inconceivable that Philbin had no idea that there was bad blood on his team. If Philbin's staff really did encourage Incognito, that's not just morally wrong, it also might cripple the team. Last year the NFL suspended several coaches for encouraging players to injure other players on the field. What's the likelihood that the NFL won't come down hard on a coach who encourages the same sort of behavior in his own team?

Because I can't talk about the Dolphins' off-the-field drama without taking a parting shot at my least favorite member of the organization, let me point out that we wouldn't be in this situation at all if General Manager Jeff Ireland hadn't drafted Martin and signed free agent Incognito. Yes, I'm finding a way to blame Ireland for this mess. It's what I do.

UPDATE 2013-11-08 4PM: ProFootballTalk.com reports that Martin's agent reported the bullying to Ireland before Martin left the team. Ireland's response was to tell Martin to punch Incognito. Imagine telling your boss that you were being harassed, and your boss telling you just to punch your coworker. Yeah, that'll do it. The Dolphins continue to pretend that it doesn't have to conform to the same workplace conditions as the rest of the country. I think they'll find that defense isn't going to stand up for itself.

Also, the NFL's "independent" investigation announced that Martin will be interviewed about the situation late next week. This thing is going to drag on forever. *sigh*

Gawker.com reports on a woman in London who peeled a banana and ended up with a house full of highly venomous Brazil wandering spiders.

I'll give you a second to think about that.

The best part of the story isn't the thought of hundreds of killer spiders hiding in your food. No, it's the comments at Gawker. It's very true that humanity is at its best when conditions are at their worst. 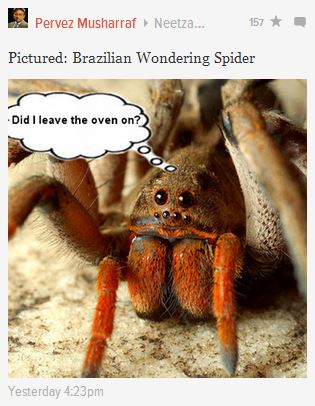 If you have 5 minutes (and a very strong stomach), check it out here.

"Why haven't you posted the pics of the cemeteries yet," Mother asked me yesterday.

"Because I didn't think anyone else would care about that," I replied. "That's the sort of thing only I find interesting."

"You're the only one who finds anything interesting about your blog," she said.

She's right. So here are some pics I took of the Georgia and Chattanooga National Cemeteries last month. 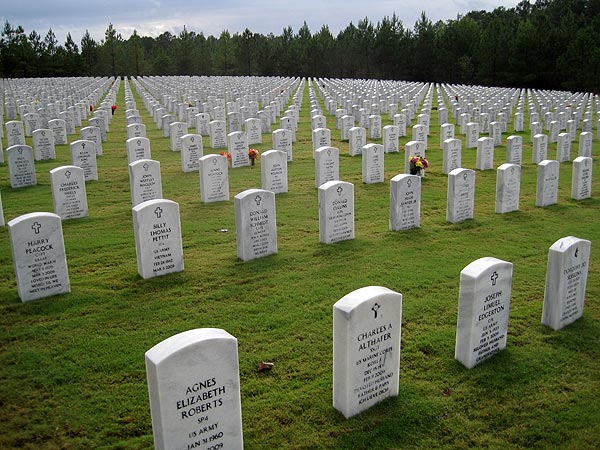 The Georgia National Cemetery is on top of a mountain in Canton. It opened in 2006 and has plenty of room, though judging by the number of tombstones it has picked up in just the last 7 years, it sadly might be full before I'm dead. It is beautiful and quiet and would be a great space for a picnic if the Veterans Administration allowed that sort of thing. 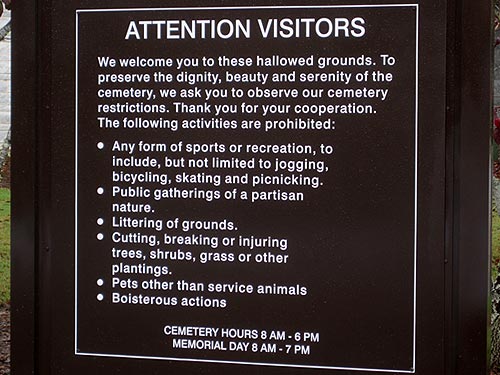 While I agree that cemeteries are not the place for littering (that's what the side of the highway is for), I think banning all "boisterous actions" takes it a bit far. I understand their reasoning, but I disagree. Maybe I'm an old-fashioned Victorian, but I think cemeteries should celebrate life, not death. I politely suggest that the VA should spend more time trying to heal the living and less time trying to police the dead. 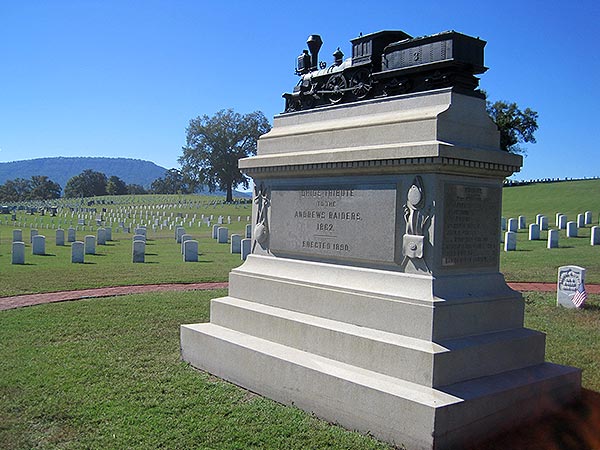 If the Georgia National Cemetery seems like a beautiful place, it's got nothing on the Chattanooga National Cemetery just a few hours up the road. It's 139 years older, and has its monuments encircling a picturesque hill that overlooks the surrounding region. Among many other, it is the final resting place of the 8 Union soldiers executed as spies for their participation in the Great Locomotive Chase of 1862. As final resting places go, this one is hard to beat.