Wriphe in a box is better than no Wriphe at all, I expect.

Saturday's final score: UGA 45, Western Carolina 16. Western Carolina's mascot is a Catamount. That's a fancy word for "wildcat." If cartoons have taught me anything, it's that dogs trump cats. 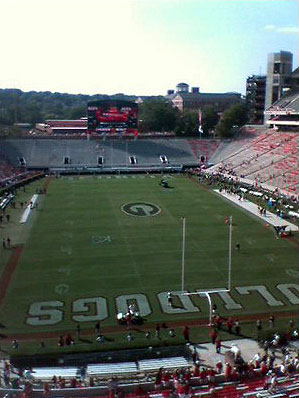 Not much of a competition, as expected. Since the on-field action was sub-par, I became distracted by the use of hand-held fans in the crowd. In the afternoon heat, the cardboard fans used by attendees to keep their faces cool appeared like thousands of butterflies fluttering their wings throughout the crowd. It was just as fascinating as the flash-bulbs that you typically see on kickoffs in the night games.

Dogs, cats, and butterflies. Oh my.