Sometimes, when we are young, Wriphe frightens us.

The draw for the opening home game of the 2019 Georgia season wasn't the opponent, Murray State, but the dedication of "Dooley Field at Sanford Stadium." 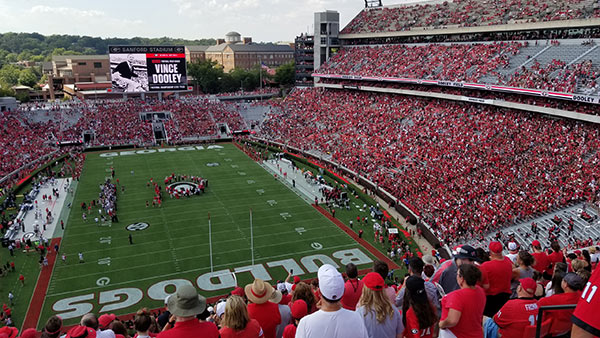 The dedication was held about 15 minutes before kickoff to a partially-filled stadium. Vince deserved a better crowd, but that's what happens when you schedule something for pregame against a sub-par opponent in 95° heat, the same temp that drove Mom and me from the stadium before halftime on opening day last year. Even football legends are subject to the weather.

As for the game itself, friend Randy — who replaced Mom at the last minute when she said one 95° opening day was enough for her — and I spent most of our time drinking bottles of water and trying to guess whether Georgia, who managed only a 7-7 tie at the end of the first quarter, could manage to pull out a win against the 49-point spread. They didn't, but only barely. Final score was Murray State 17, UGA 63 (a 46-point differential). And yes, we watched all the way until the last second had run off the clock, a decision I'm sure my poor crispy skin will be paying for tomorrow.

Well, that was closer than it should have been. Tennessee 32, UGA 35. Early in the 4th quarter, I marveled that the UGA defense had held an SEC opponent to 17 points. Then the Bulldogs reverted to form. 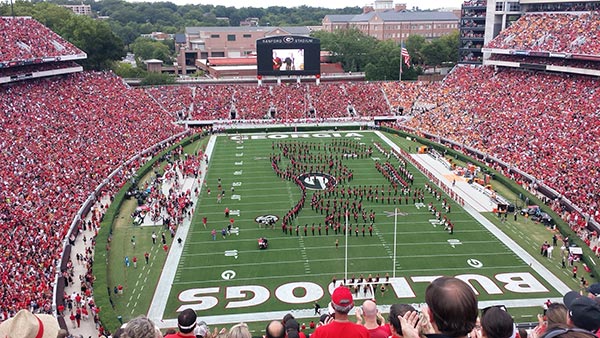 There were plenty of celebrities at the game. Peyton Manning was reportedly present, and several PGA golfers and actress Chloë Grace Moretz were introduced to the crowd. However, the guest of honor was Vince Dooley, who took over as head coach 50 seasons ago. Vince looked good and pleased to be back on the field. At halftime, the band spelled his name, and he mugged for the cameras with his family, friends, and former players.

I've never met Dooley myself, but I did know a student who in 2002 decided to walk into his office as Athletic Director to meet him. He got as far as Dooley's secretary who told him that Mr. Dooley was far too busy to meet anyone who didn't have an appointment. However, before the student could leave the office, Dooley stepped out of his office and signed the student's hat on the spot. Dooley didn't have to do that, and I think it says a lot about why Georgians like the man. 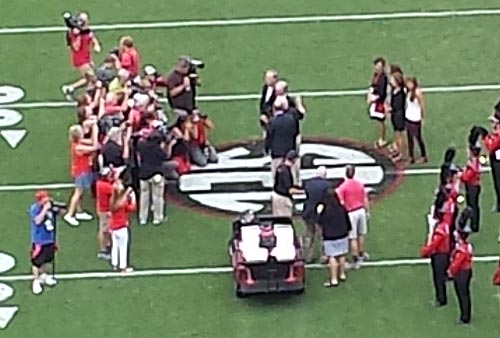 To honor Dooley, the Bulldogs won by the skin on their canine teeth, surviving a game of terrible play by quarterback Hutson Mason (I begin to worry that he's not very good: a qb who only looks at one receiver from snap to throw will not win many games) and some bizarrely self-imposed wounds. For example, UGA sent 13 men on the field for a punt return in the 4th quarter. Coaches noticed the overage and removed one man. Tweet! Illegal participation. The 5-yard penalty didn't give Tennessee a first down, so they lined up to kick again. This time, Georgia over compensated, sending only 10 men out on the field. Ouch.

But we won in the end, and that's what counts. Bring on Vanderbilt!