Art is the proper task of Wriphe.

On Saturday, the Philadelphia Eagles cut Tim Tebow, who was competing to be their 3rd quarterback. On Sunday, the Eagles signed Josh Morris, a quarterback not good enough to play for the woeful Jacksonville Jaguars. I'd better run this pic of me in my Tim Tebow mask now, because this might be Tebow's last stab at a position in the NFL. 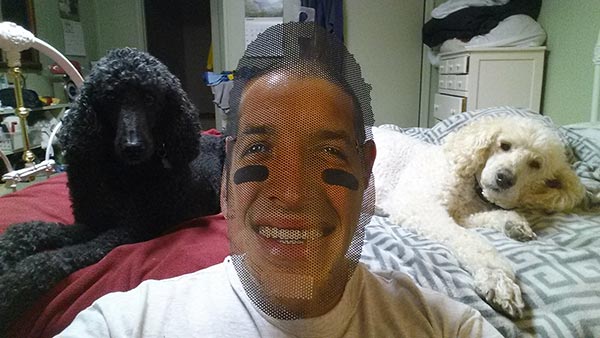 Despite his playing for Florida and thumping his bible hard enough to wake the damned, I still like Tim Tebow. He seems like a pretty good influence on a locker room. Coaches say they don't like him because he doesn't "show well" in practice. No, his mechanics aren't great, but there are easily a half dozen starting quarterbacks in the NFL less mentally prepared to lead a team to victory than Tebow. Being a winning quarterback takes more than just completing touchdown passes in practice.

There's no point in crying for Tebow. I'm sure he'll land on his feet. It's just a shame those feet won't be under center in the NFL.

I'm not the only one pissed off that the Dolphins have added 2012 to their string of inexplicably terrible off-seasons. There were protests outside of Dolphins headquarters yesterday after the Dolphins released Yeremiah Bell for "cap space." The protesters carried "Fireland" placards to suggest what they think of General Manager Jeff Ireland. (Personally, I assume the "F" stands for "fuck.") The Dolphins had plenty of room under the salary cap to recruit an injured, 36-year-old Peyton Manning, but not enough room to keep a healthy, 34-year-old Bell? Is it a coincidence that Bell is the only consistently competent player in the Dolphins' secondary? Ye gods, what is Jeff Ireland doing?

To make matters worse, the Dolphins are privately saying that they have no interest in Tim Tebow, or as we call him around here, "Touchdown Jesus." I suspect that this means that new coach Joe Philbin thinks that Tebow sucks, which means that Philbin and I are starting out on the wrong foot. Right now, Philbin has on his roster a quarterback not good enough to play for the worst team in the NFL in 2010, and a quarterback not good enough to play for anyone in 2011.

Surely, Tebow, who managed to motivate his left-for-dead-in-week-5 team into a playoff victory, has to be worse than those two quarterbacks, right, Joe Philbin? You sure would hate to have to build a team around a quarterback like Tebow, especially since you already have such a fine team now, right, Joe Philbin? We shouldn't point out that your former protege Matt Flynn pointedly chose to compete for a job in Seattle rather than start for you, should we, Joe Philbin?

Bah. The 2012 Dolphins are already starting to smell like dead fish.

The annual ass-whipping that UGA takes from Florida is still on, but it's so terrible this year that I've actually stopped watching it. I really couldn't be more disappointed in the outcome of this debacle. I could say a lot of terrible things about Florida (I really, really hate them, and I hate the fact that every year this game is played in a "neutral" site less than an hour from Gainesville), but the fact of the matter is that we didn't play well enough to win. Georgia has a lot of young talent, but when the opponent catches a few breaks (the refs called every early important play against us and our kicker is completely shitty -- his name is Blair Walsh; let's see how many more games before we forget his name entirely) they simply give up. I hate to say it, but that's your fault, Richt.

I also appreciate that Urban Meyer has pulled his starting quarterback early in the fourth quarter. After the bitching he's done for the past year over our celebration penalty in the previous meeting, he could have left Tebow in to run up the score and his stats. But he didn't. That's something that Spurrier would never have done and a show of good sportsmanship.

Congratulations, Florida. I hate you.