If you don't program yourself, Wriphe will prgram you!

I've been defending Tennessee Head Coach Phillip Fulmer this year. I figured that he's won a lot of games and doesn't deserve to be fired for one bad season. But after Tennessee's dismal performance against Georgia yesterday in a 26-14 loss, I'm not so sure anymore.

Tennessee looked completely listless. Georgia Southern had more fight in them than the Volunteers showed against Georgia. Tennessee's two scores came only after great defensive plays fired the team up briefly. Otherwise, Georgia appeared to dominate, and Tennessee didn't seem to care about their own fate. Even their typically boisterous fans didn't seem to care. I mean, the Tennessee Band only played "Rocky Top" 7 times during the entire game! That's like 50 times less than their average.

Don't get me wrong, I'm not cheering for the Vols. But I do lament the sudden disappearance of a former rival. Where's the satisfaction in kicking a wounded puppy? Get well soon, Tennessee. I hope to savour our victory against you next year.

P.S. Sorry, but I forgot to take a camera to the game! I've got no excuse. I dropped the ball. I promise to try harder next week against Vandy.

Damn, that sucked. The Tennessee band played Rocky Top 20 times between kickoff and final clock expiration. Of those 20, only 2 were in the first half. I hate Rocky Top. 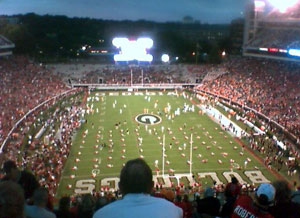 Our highly-rated defense gave up 51 points. That's 17 more points than we had given up to our first 5 opponents combined. Ugh.

Note for next year that for 4 consecutive years, the away team has won the UGA vs. Tennessee game.