An editorial cartoon in the newspaper got me to thinking about how Superman would handle something like the COVID-19 outbreak. In the cartoon, he was staying home to prevent the further spread of the disease. That's cute, but it's frankly a waste of Superman's power. No one who can hold his breath indefinitely as he flies through the Sun to disinfect himself needs to worry about a shortage of Purell.

Ironically enough, a plague was among the problems that Superman 2020 had to deal with in the far flung future of... 2021.

Remember Superman 2020, aka Superman III? He's Superman's grandson, the son of the son of Superman. We last discussed his adventures, written at the dawn of the 1980s, in January. (You know, way back when the threat to the world was white supremacy. Damn. What's it going to be by July? My bet is on Godzilla.)

Anyway, at the end of his first year in action, Superman was confronted with an uncomfortably familiar danger when the doors of the closed city of New Metropolis were opened on New Year's Day 2021, and everyone in the city was found dead.

I did mention this was written in 1982, right? Legionnaires Disease was discovered in an outbreak in 1976 which killed 15% of the original cases. Thirteen thousand cases are diagnosed per year in the US, and modern techniques have squeezed that fatality rate down to about 10%. (For comparison, COVID-19 is still killing under 2% by most reckoning, though it has infected over 26,900 Americans in the past three months alone.)

Maldavia did indeed have a 21st-century outbreak of flu that shut down the country and killed 6% of those infected, though that was in 2017, not 2014. Still, I'd say that's close enough that Nostradamus would have gotten credit for the prediction.

Remember those white supremacists I was speaking of earlier? Superman made about as much progress defeating them as Spike Lee did. When the hero arrives to help the panicked population, those dicks were quick to rush to social media to throw blame. (Life imitating art, or the other way 'round?)

Hey, if he were really at fault, I'm sure the authorities would have called it the "Superman Virus" in public addresses instead of referring to it by its scientific name. Because authorities have a responsibility not to mislead the public. Or so I've heard.

It turns out that Superman isn't the cause of the virus but the solution. Using his aforementioned super-breath, he distributes the cure throughout Metropolis' atmosphere, causing it to literally rain medicine. 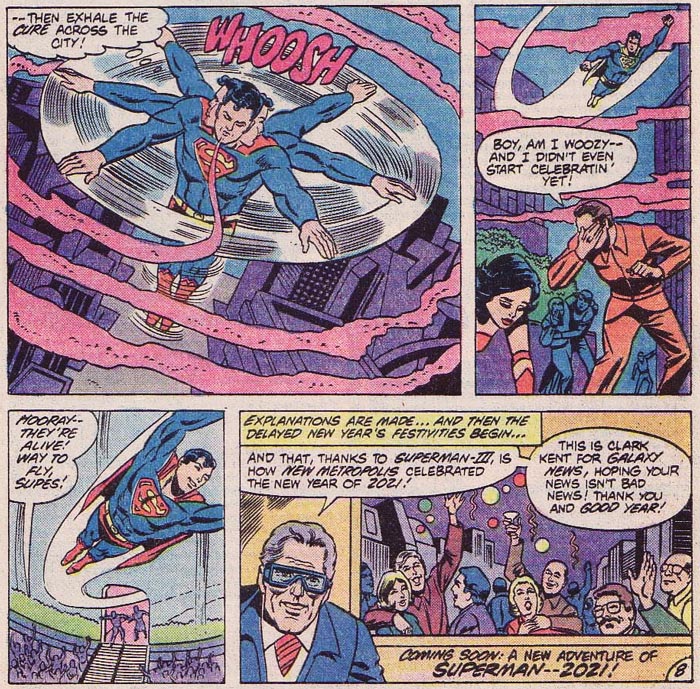 It only took Superman eight pages to thwart a plague and save the world, proving that you can save everyone without a single test kit so long as you have one Man of Steel. My hero.

And so begins a series of backup stories first appearing in Superman #354, released 40 years ago.

It's easy to look at this series by Superman stalwarts Julie Schwartz and Curt Swan and see what the old-timers got wrong about the far flung future forty years forthcoming. (Sorry. You can't talk about Silver Age comics without a lot of alliteration.) Flying cars, domed cities, and passenger flights around the moon are still more dream than reality.

What is considerably more impressive is what they got right about contemporary life, and I don't mean the giant flat-screen TVs. 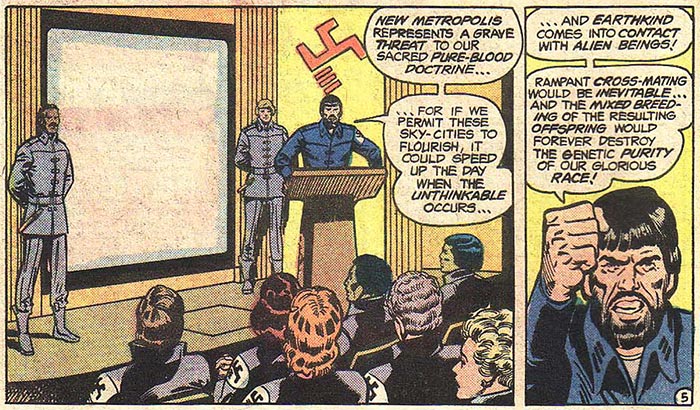 Superman-III's main antagonists aren't mad scientist or sentient computers. No, in the "future," Superman still has his hands full with intolerant Nazis. Their rhetoric would sound crazy if it wasn't something we heard every day on Twitter and Facebook and White House press releases.

Or saw at Navy football games.

Despite the predictions of many over the years (myself included), comic books still exist in 2020. And it's a good thing, too. We need the Man of Tomorrow as much as ever to lead us in the never-ending battle for Truth, Justice, and the American way.