You light up my Wriphe.

Sam Elliott has probably played probably more bikers and cowboys than any other actor alive. He's the bouncers' bouncer in Roadhouse, the only soldier tough enough to hunt the Hulk in Ang Lee's Hulk, and the prototypical Marlboro Man in Thank You for Smoking. In his latest role, Sam Elliott IS Smokey Bear.

It would seem that Elliott has been The Bear for a few months now, since the Ad Council launched it's latest (and incredibly poorly named) "Get Your Smokey On" campaign last summer. I just now noticed because I encountered the ads between Dragnet 1967 episodes on hulu.com. One minute I'm being lectured about the disastrous side-effects of LSD by Sgt. Joe Friday, and the next I'm being told to douse my campfire by the narrator of The Big Lebowski. (Coincidence?) 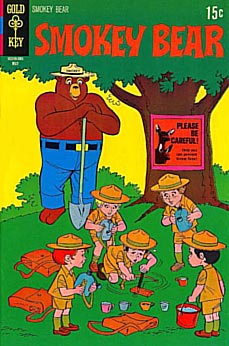 Sam Elliott has one of the most distinctive voices in Hollywood history. His throat is lined with gravel and broken glass. As his words emerge from his mouth, they take on the appearance of weary, hard-traveled, hard-won experience. Now when I hear Smokey's New Millennium catchphrase, "Only You Can Prevent Wildfires," I don't think of some cartoon bear, I think of Sam Elliott. While that certainly prevents me from starting wildfires, it's because I'm afraid to piss off Sam Elliott, not because I don't want to let down some cartoon bear.

This is the equivalent of my fear of CNN because Darth Vader was their pitchman. I guess the "kid-friendly" approach wasn't working, so the U.S. Forest Service is trying "hard-ass" now. Is it the right thing to make Smokey sound like he's smoking 10 packs a day? And does the giant talking bear have to loom over me with a shovel? Maybe that isn't supposed to be threatening, but I've seen Sam Elliott go to town on someone with a pool cue before, and I don't want him coming at me with a shovel in his hand.

So remember kids, next time you're gallivanting carefree through nature, remember that if you drop a cigarette butt, a hot match, or a gallon of kerosene, Sam Elliott is going to appear and kick you ass back to the stone age. Be afraid. So speaketh Smokey.