Just in time for the July release of the latest sure-to-be-schlock Batman movie, The Dark Knight, Batman has killed again. But it wasn't some policeman or stunt driver this time. This past Saturday, the Batman: The Ride roller coaster at Six Flags Over Georgia decapitated a 17-year old boy.

Sure, the boy had jumped some fences to enter an unauthorized area around the coaster, but isn't that what Batman would do? The boy was only trying to protect his property, after all, and Batman is all about defending one's territory and goods. And what was the boy in search of? That's right: his cap, which as we all know is the key to any teenaged Southern boy's identity.

Six Flags, you've done it again. Like every great super villain, you attack your heroic nemesis where it hurts the most: their reputation. Last year you rip the feet off of a girl on a Superman: Tower of Power ride, this year, you tear the head off a boy with a Batman ride. (This is actually the second reported fatality for this ride. In 2002, it killed a ride operator.) And these aren't the only instances. Six Flags Darien Lake's Superman: Ride of Steel nearly killed a rider in 1999, a manslaughter successfully perpetrated five years later by the identical ride at another park when Superman: Ride of Steel at Six Flag New England killed a rider in 2004.

So be careful out there, people. If a dancing centenarian or screaming Asian arrives on your doorstep with a can of Coke offering a Six Flags admission discount, it's probably a trap.

Last year I was pretty rough on Superman rides at theme parks, especially Six Flags. (Especially after they made a girl a paraplegic, as noted a year ago yesterday.) However, I do have to give them credit for being some of the only places on Earth where you can see statues devoted to Earth's greatest hero.

To be fair, the ride above right is not a Six Flags park but Movie World, a former Time Warner venture, now divested, in Australia. Maybe not so coincidentally, it's also my favorite concept, with the Superman figure attached to the rear car, pushing the cars around the track. That's inspired!

Though they have more of a life-sized cardboard cutout than a statue, I think that some credit should go to the all-but-defunct Six Flags New Orleans for including Superman aside the JLA Fountain, where he's much more approachable than his brethren pictured above.

These are pre- and post-Katrina pics, obviously. (Note the wall, visible clearly in the photo on the left, appears as barely a curb in the picture on the right. That's quite a leaky fountain.)

Have I mentioned that I'm addicted to Google Earth? Well, I am. And I've learned that visible shipwrecks are much more common than I would have thought.

My favorite place to stare at from space is Prypiat, Ukraine, the city evacuated following the Chernobyl meltdown in 1986. (It's really the ultimate in modern urban ruins.) But a close second favorite attraction is aircraft museums and airports. Don't ask me why, but there's something amazing to me about seeing so many large, gravity defying crafts grounded.

And there's always the odd bonus scene, such as this 85ft Bat-Symbol at Six Flag America in Washington DC.

I'm still looking for signs of the giant Optimus Prime in Kunming, China, but for a six-story statue, he's been surprisingly elusive. Maybe it is possible for a tractor-trailer sized talking robot to hide amongst humanity.

In a rather unexpected footnote to my blog entry earlier this month on June 11, it was reported late yesterday that a 13 year-old girl had her legs severed on the Superman Tower of Power ride at Six Flags Kentucky Kingdom.

No, wait, don't bother scrolling down. See, here, I'll me quote myself:

"You can forget about those Superman rides in Six Flags parks across America. Six Flags is the worst theme park chain by far, and their run-down, cramped attractions that like Kryptonite sap the life from the Man of Steel can hardly be called Super-parks."

Now Six Flags has cost some poor girl her legs, and she'll never walk again. And unlike that Adventures of Superman episode "Around the World with Superman," I don't think Superman is going to be able to repair the situation by carrying the crippled girl around the world.

(Yes, I am taking the opportunity of some girl's debilitating accident to say, "I told you so." That's just how I roll.)

I tell you, by not building one great super-park, we're just dooming more children to wheelchair-bound lives. Do you really want that on your conscience, amusement park builders of America? Remember, if you don't build it, you're letting the terrorists win.

Wait just a darn minute. How come Harry Potter gets 20-acres of theme park before Superman? Just because Potter has sold more than 325 million books in his short, six-book publishing career, making J.K. Rowling reportedly the first author-turned-billionaire, he gets the run of a Florida theme park? Why, if Superman and Action Comics are conservatively estimated to have sold a mere 40,000 copies per issue (which is not bad for a modern comic, but laughable compared to the titanic numbers of even 10 years ago), Superman has moved almost 25% of Harry's haul with two comic book titles alone. Where's his theme park? 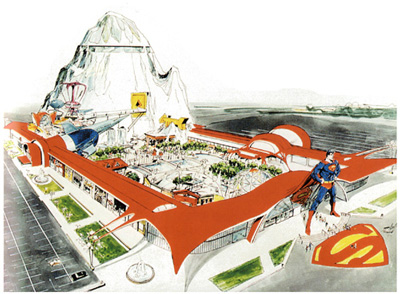 You can forget about those Superman rides in Six Flags parks across America. Six Flags is the worst theme park chain by far, and their run-down, cramped attractions that like Kryptonite sap the life from the Man of Steel can hardly be called Super-parks.

Roller Coaster Database tells me that there are 12 active Superman themed coasters worldwide. Think about how awesome it would be to ride a dozen Superman themed rides through a single park divided into areas representing Krypton, Smallville, Metropolis, and the Fortress of Solitude. Coasters simulating flight, cyclotrons demonstrating Superman's ability to drill through solid rock, shooting ranges with heat vision, and, of course, a few carnival games testing your strength, speed, reflexes, and mental dexterity, among other comparisons to Superman's many, many powers. I can hear the barkers now: "How many people can you hear yelling for help?" "See a man blow on this cup of water until it turns to ice!" "I challenge you to hold your breath during a brief trip around the moon!" "Guess the number of people trapped inside the burning building!" Why, even the metal detectors checking guests for weapons as they come in the door could be turned into a comical demonstration of Superman's X-Ray Vision!

I understand that Metropolis, Illinois, has pursued a Superman themed attraction for years, but I'm sure it would end up more like South of the Border than Cedar Point. (No offense to South of the Border, but it's not really all that Super, unless third-world truck stops are your thing.)

Oh well. I guess I'll just have to keep wearing my Superman underoos while leaping off my roof. At least the admission price is right.