The thing that is incredible is Wriphe itself.

I have a friend who is absolutely in love with Oscar Goldman, the eternally inappropriately sunglassed chief of the U.S. government's Office of Scientific Intelligence (OSI) and boss of United States Air Force Colonel Steve Austin, the world's only Six Million Dollar Man. Because of this man-crush, I'm frequently subjected to long marathons of Six Million Dollar Man episodes, one of the most boring shows known to mankind. As an unwilling participant in the misadventures of Steve Austin, I've learned quite a few things about how poorly the United States handles its scientific secrets and how world-famous NASA moon astronauts spend their free time. 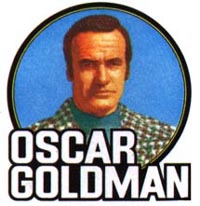 For those of you who may not know, Col. Austin was chosen for bionic implants after he crashed a NASA test plane. Sure, we may have the technology, and technically we can rebuild him, but why would we want to? It's an expensive procedure to waste on a fellow who can't even properly land a plane. (By the way, $6,000,000 - six million with an "M" - in 1973 translates into nearly $30,000,000,000 - thirty billion with a "B" - in 2006 when adjusted for inflation using NASA's own inflation calculator. That's approximately how much money the world's second richest man, Warren Buffet, recently gave the world's richest man, Bill Gates, to spend on eradicating pandemic diseases. I suppose that no one told him that he could have purchased bionic limbs for the same cost.)

Presumably, Austin's particular disfigurement was perfectly compatible with the potential bionic replacement surgery that the OSI had already planned for a future accident victim, but I'm really not sure why they chose Steve Austin. Austin is demonstrated, even in the pilot episode, to be a laid-back, sunrise-watching, skirt-chasing, self-indulgent pacifist. Hardly a prime candidate for the job of "patriotic super-spy." In fact, Austin will even lament the implementation of his bionics, calling himself "less than human." Steve, last time I checked, being faster than a speeding bullet and more powerful than a locomotive does not lower you to "less-than-human" status; laying in bed and complaining about how good you now have it does.

The good Col. Austin had both of his legs replaced with bionic limbs that could propel him at speeds up to 60 miles per hour. His new bionic right arm could lift several hundred pounds effortlessly. His destroyed left eye was replaced with a camera that could provide a 20x magnification. And all of these modifications were made without reinforcing his hips for the jostling of the extreme vibrations while running, his spine from the torque created while lifting cars, or his skull from the frequent "karate chop" knockout blows to the head that every thug, hitman, and Soviet spy would employ to incapacitate him. That's good medicine.

Most disturbing (and far-fetched) is the premise that these bionic enhancements are powered by self-contained atomic generators in the arm and legs. That alone should be a far more spectacular accomplishment than the bionics these generators power, but it is frequently played down during the shows. In a typical nuclear reactor, radioactive decay is harnessed to heat water for energy generating steam-powered turbines. This makes Steve either radioactive or full of hot air, maybe both. It's possible that since you never saw Steve water his legs, his generators were a new kind of atomic power unfit for anything other than making metal legs move really fast. In fact, I don't recall anything else during the run of the show using the power of these generators in any other way. Nuclear power was instead frequently shown to be a dangerous tool demonstrated by way of several near reactor meltdowns, missing atomic devices, and the destruction of the Bahamas via a nuclear warhead (detonated by Steve himself). Were we supposed to be subtly fooled into believing that Col. Austin was extra-dangerous because of his nuclear powered limbs?

Once fully healed, Steve Austin was put to work as a super spy in order to pay the government back for his new Top Secret "Security Clearance Level 5" super powers. (On a USAF Colonel's O-6 salary, which I estimate was probably slightly less than $20,000 in 1973, including his NASA and super spy bonuses, paying back those $6,000,000 would probably have taken a mere 600 years.) He refused the job at first and has to be tricked into dueling with the Russians for the location of a stolen American warhead. (I know it doesn't sound like something that someone can be tricked into, but Col. Austin does not list "Mensa Membership" anywhere on his bizarre resume.) Reluctantly, Steve agrees to be OSI's poodle, and soon found himself battling Russians, foreign terrorists, mobsters, assassins, robots, moonshiners, rogue archeologists, other bionic men, crooked cops, rockstar groupies, imposter Steve Austins, telepaths, mountain lions, earthquakes, aliens, sharks, and John Saxon.

As a secret agent, Steve reflected James Bond's frequent misunderstanding of stealth and low profiles. Col. Steve Austin, astronaut and college football star quarterback, was widely recognized throughout the world, destroying most chances for subtlety. I suppose that super speed and strength don't naturally lend themselves to guileful subterfuge, but then neither did Steve's fashion sense. (Button up that shirt, Steve!)

What little camouflage Steve did possess was often lost when Steve would capriciously reveal his enhancements to anyone within earshot. He simply couldn't resist the opportunity to jump over a 10-feet tall fence or race an automobile. Steve, here's a super-spy tip: using the line "I eat a lot of carrots," to explain away how you were able to read a car's licence plate several hundred yards away in the dark isn't going to stand up to any real scrutiny. Steve's indiscretion became so widespread, even Monday Night Football host Frank Gifford who supposedly played college ball against Steve Austin in the early 1950s was therefore naturally entrusted with knowledge of Steve's top secret enhancements. (Guest stars always found out about Steve's abilities. William Shatner, Farah Fawcett, and Gary Collins among others all were entrusted with some of the nation's most classified information. They were a trustworthy bunch, I'm sure.)

So Steve Austin was a lousy pilot and an incompetent spy. Based on the fact that the only female interest that he could keep was a fellow American bionic slave/spy, I'm guessing he was probably a poor lover, as well. In one episode, Steve even admits to a crippled boy that he fumbled a lot as a football player. It should be no surprise that Oscar sends Steve to the ends of the earth (which generally looked suspiciously like southern California) on pointless suicide missions; he has to be hoping that one day, Steve won't come back. I sure do.