Last week, Dungeons & Dragons was inducted into the National Toy Hall of Fame. Obviously, I think this is a great thing.

But more important than any novels I've written about a role-playing adventure I created, this special occasion gives me the opportunity to remind you of Tom Hanks' greatest performance.

This movie is Mazes and Monsters, the 1982 classic based on the right-wing paranoia that Dungeons & Dragons was destroying childrens' minds.

Drink it in. That man has won two Academy Awards.

Move over chocolate and peanut butter, you've got company. I was supposed to be updating the website this weekend, but instead I spent all day playing Dungeons and Dragons the way it was meant to be played: as a pinball machine. 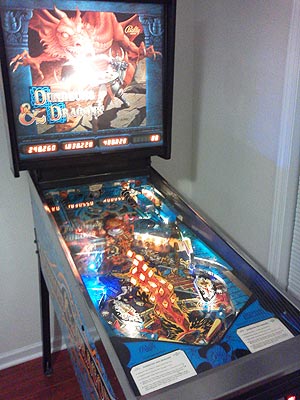 If you think role-playing games and pinball machines make an unlikely combination, consider the technological odd couple presented by pinball machines and the internet: specific details about this cabinet, its innards, and its marketing materials can be found online at the Internet Pinball Machine Database. Thank you, internet.

A cleric, a monk, and a druid stood together against the malicious, knife-wielding creeper. The clank of sword on steel echoed down the hall, the sounds of battle from the adventuring party's lone fighter.

Pausing just long enough to cast a quick spell against the creeper, the cleric hustled away to tend to the fighter. The druid was worried. The departing cleric gave an encouraging wink to the druid, "Don't worry; you've got this."

As fluid as water, the monk struck the creeper and sprinted away towards the fighter's opponent. The druid still had doubt. The darting monk gravely reassured to the druid, "He said you've got this."

With the violence of a snake, the creeper hurled a knife that struck the druid's chest. The druid was visibly upset. The creeper said to the druid with a giggle, "You've got this!"

Like the proverbial sack of potatoes, the wounded druid crumpled to the ground. The druid sighed. Said the druid to himself, "Were they talking to me?"

Love role-playing games but tired of the same old hack 'n slash campaigns? Then have I got a treat for you: Smallville: The Roleplaying Game! This is not your father's roleplaying game: this game's got angst! 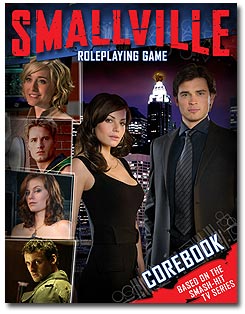 Now you can take on the role of a teenager who is too shy to tell the girl of his dreams that he is invulnerable to bullets but not Cupid's arrows! Or play as the jealous rival who spends an inordinate amount of time trying to extract himself from his parents' controlling shadow while assuming only model poses and moody pouts. And battle villain after villain who developed amazing and obvious powers as a result of exposure to alien radiation that no one over the age of 18 has seen before or since!

Rest assured that if nothing else, you won't have to worry about your characters wearing any garish costumes. Everyone wears black! (All the kids are doing it!)

Gary Gygax is dead. Should we laud him as the Father of the RPG or curse him as the enabler behind that irritating Uni on the Dungeons & Dragons cartoon? Put yourself in my shoes and decide!

Alright, folks, the latest D&D campaign is now online. You can read it over in the RPG Vault.