Between us and heaven or hell there is only Wriphe, which is the frailest thing in the world.

I know that in some situations you have little choice but to turn to crime. For example, there's Jean Valjean from Les Misérables who is forced to steal bread or starve to death. But I'm pretty sure that color-blindness isn't a very good reason to go stealing from people.

This here is the Rainbow Raider. His birth name, as you can see, is Roy G. Bivolo. And yes, he's been colorblind since birth, so he has no idea how bad his costume looks. A reason to be bitter? Sure. A reason to dress like a gay flag and steal paintings? No, probably not. 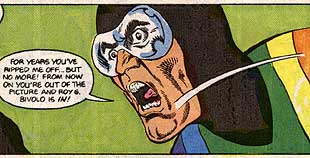 Comic books have always supported the "nurture over nature" theory of psychological development. I mean, giving your colorblind child a name like Roy G. Bivolo, you have to know that he's going to end up in a nuthouse. (Why can't you name him Dave? You probably need to stay away from Robert, though, because Bobby Bivolo is not a huge improvement.) If villains were intrinsically genetically bad and couldn't be cured, then heroes would have to come up with a better solution than catching them and locking them in cages, now wouldn't they? Comic book heroes love to give villains second, third, even fourth or more chances in order to learn their lesson. I mean, I've lost count of the number of times that Harvey Dent has had plastic surgery and yet he ALWAYS returns to a life of split personalities and Evil with a capital "E." It's never really his fault, of course. He wants to be good. But comic book writers are just conspiring against him.

There are dozens of characters like poor old Roy who feel they got a short end of the stick. I think most of them are probably Flash villains. (Captain Cold, Gorilla Grodd, Mirror Master, Pied Piper, Weather Wizard... and those are just the ones with the alliterative names! For a man who claims to be the fastest man alive, he sure has a lot of crap hanging on to him.) And they all just want revenge on the world for having their ridiculous theories, names, physical appearance, or whatever laughed at. What they really need is a hug.

In hindsight, I suppose that makes comics much superior to the real world, where those same people climb clock towers with rifles or run for political office.

Why do I mention this now? I don't need a reason, that's why.