Not too long ago, I criticized artificial flavoring in potato chips. Little did I realize it at the time, but soon I, too, would fall victim to the siren's call of the cross-pollinated potato chip. May I introduce you to Herr's Heinz Flavored Potato Chip? 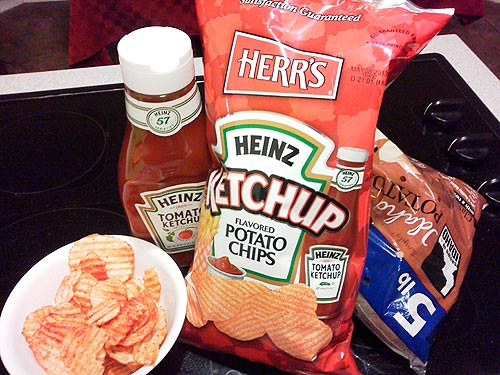 If you are anything like me, your first reaction was probably "bleech!" But if you stop to think about it, you'll realize that the only thing more American than ketchup and potatoes is powdered ketchup flavoring and fried food!

Granted, the flavor is not what you might expect from a potato chip. They are almost cloyingly sweet, much like if you were sucking Heinz ketchup straight from a bottle. (I'm not admitting to having done that, by the way, but you can draw your own conclusions.) As the bag says, "Satisfaction Guaranteed"!

In case you missed the news last week, Warren Buffett's Berkshire Hathaway investment group has just bought H.J. Heinz Co. for $23 billion. I have to suspect that Buffett must have recently discovered the beauty of the ketchup chip as I did, and he chose to invest in the company's sure-fire future. I own Coca-Cola stock for much the same reason!

So from now on, if someone ever asks me what I have in common with multi-billionaire Warren Buffett, I'll tell them that we both put our money where our mouth is.

For some time, people have been saying that the end of the world will take place in 2012. Finally, there is evidence to support that theory:

With artificial flavors ranging from Barbeque Rib (is that pork or beef?) to Buffalo Wing (tastes like chicken?), these "Tater Chips" are now arriving on grocery store shelves near you. The product slogan is "Boy that's good eatin'!," although it is unclear what the word "good" is supposed to mean in this context. I suppose if you can't trust a name like "The Cable Guy" to deliver a delicious, artificial meat-flavored snack chip, who can you trust?