The best things in Wriphe are silly.

The Georgia Bulldogs kicked off their 2009 season this weekend in a horrible loss to Oklahoma State University. Just for the record: I'm not panicking yet.

We're young and in a talent gap at receiver and quarterback. Coaching has to step it up, especially on our perpetually abysmal special teams. Everyone's got to keep their head screwed on straight instead of becoming all self-pitying hangdog at a little adversity. The defense needs to stop a pass that matters for a change. And can someone, anyone please fire Mike Bobo? Like, now. Before he can call another play. Grrrr.

But as I said. I'm not panicking. Yet.

First game of the UGA season: victory! Dawgs win, 35-14, over the Oklahoma State University Cowboys. Word on the street was that the Cowboys sold out every seat that we offered them. Quite an impressive display of fan loyalty, there. 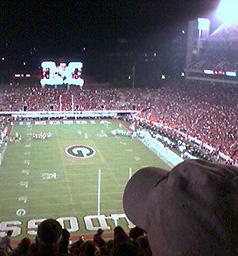 I know it was the first game and all, but I was surprised that the lady who owns the season tickets in the row in front of me didn't recognize me. She recognized my brother, and remembered my mother and father, but not me. I must have gained a lot of weight since last year.

Second game of the UGA season: defeat! Dawgs lose, 16-12, to the University of South Carolina Gamecocks. The Bulldogs performance was utterly uninspired, and the generally low expectations for this year's squad were proven uncannily appropriate awfully early in the season. 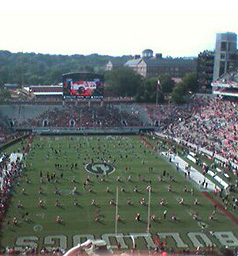 The crowd was barely involved in the game. I don't know if we were too shocked or if we had resigned ourselves to the loss early. In last year's SEC home losses, the fans were behind the team until the final second. But this time we seemed to be as stunned as the players on the field that South Carolina, who most of us had written off as beneath us, was having their way with us. Damn you, Spurrier! >shakes fist in rage<

Of course, the NFL season kicked off this weekend, and my team, the Miami Dolphins, lost. The teams of my couch-mates, my brother and his girlfriend, respectively cheering for the Philadelphia Eagles and the New York Giants, also lost.

So far, this does not have the makings of a very good Batman and Football Month.