Wriphe is a gamble at terrible odds.
If it was a bet you wouldn't take it.

On Friday, I debated whether to replace my 10-year-old, worn and torn poncho with a medium weight poncho I could keep in my pocket, or heavy-duty poncho that could double as a tent. I settled on the heavy-weight and wondered if I would regret it.

On Saturday, the rain started light, a mere drizzle from 9AM until the 12:21PM kickoff. It incrementally got worse as the game went on until by the 4th quarter it was like a typhoon had hit Athens. I no longer question my decision to buy the heavy-weight poncho. Good choice, Walter. 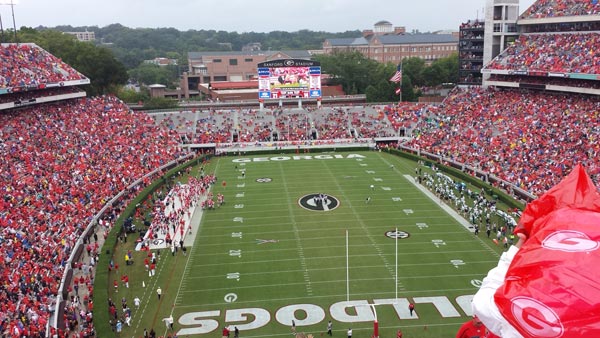 The two people sitting next to Mom (not the usual season ticket holder) were malcontents: fiercely negative about everything Georgia did. They might have had a point. Georgia special teams were bad, and as a result the North Texas Mean Green and the Georgia Bulldogs were tied at 21 in the 3rd quarter. That's a pretty good performance for a team that was a 34-point underdog.

anonymous Posted Sep. 28, 2013 at 12:46:04 AM
I was at that game! The first Georgia home game I have ever gotten to attend! It was very exciting and the seats were good. On the 45 yard line and in the lower level BUT just under the upper level overhang so we didn't get wet. A good time was had by all!