Wriphe yeilds only to the conqueror.

I was worried Georgia might have their hands full today. Turns out, not so much.

UGA and MSU entered the game undefeated and ranked 11 and 17, respectively. However, early season rankings don't mean much. UGA squeaked by Notre Dame while MSU had walked over LSU. That made it seem that MSU might be tough competition. The final score, 3-31, proved otherwise.

It's still early in the season, but if Georgia can play as well as they did today against the rest of their SEC schedule, it could be a pretty good year.

If every football game starts with a 50% chance of a team winning, there is an 88% chance that at least one of three games will end in a win. So you can probably tell what sort of weekend I had based on the following football weekend in review:

Friday: The Newnan Cougars lost their third game in a row. This is especially disappointing considering that they started the season with the longest ongoing winning streak in the state, and until Friday night hadn't lost a home game to a regional opponent in nearly 5 years. Oh, well. All streaks have to end sometime.

Saturday: Speaking of blown streaks, the Georgia Bulldogs lost for the first time in 36 years to Mississippi State, 24-12. UGA really couldn't have looked much worse, as the team seemed determined to lose the game. The team is now 1-3 and has yet to play rivals Tennessee, Auburn, Florida, and Georgia Tech, all of whom will waste no opportunity to kick a dead dawg. At this point in the season, there is no excuse for the players looking so unready for football game. Mark Richt has lost control of this team, and all of the seats in the football program should now be considered hot. (Ever the loyalist, I point out that this is perhaps not all Richt's fault: our Athletic Director was caught drunk driving while cheating on his wife in the off-season. If you want to talk about top-down bad examples, there you go. [And I find that I am mentally unable to prevent myself from typing, once again, that I hate Mike Bobo. Maybe it's a disease. Boboism: an inability to control your own actions, including putting together a competent offensive gameplan.])

Sunday: The Miami Dolphins fall to the New York Jets for the first time in 4 games. If this had been any other two teams, I probably would have called this a good game. But it wasn't. It was depressing. This was the Dolphins' first loss of the season, and the team falls into a three way tie with the Patriots and Jets. (The Bills, as usual, suck.) The NFL has a long season, and I'm not going to make a mountain of this molehill. But I would have liked to win such a close game. Especially against the Jets.

Keith Posted Sep. 27, 2010 at 09:35:47 AM
Whereas I feel bad for your terrible football weekend, part of which I share, *Shakes fist at UGA* I do now feel much better about my sports weekend. True, UGA and Ga Tech did lose and looked bad doing it, the Atlanta Falcons won AND Georgia Southern won. On top of that, predictions of a Georgia Southern championship are being tossed around. So thank you for making me feel better about my weekend Walt. Though, I don't feel as bad about the loss as you do, Rex is an ASS and I hate that his team won the game!

Wriphe [Official Comment]: Posted Sep. 27, 2010 at 01:19:17 PM
Um, Georgia Southern beat Elon. They have an enrollment of 5,000. You have an enrollment of 20,000. Elon was Duke's season-opening cupcake opponent. They are tied for last in your conference. Georgia Southern may be great, but beating up on Elon isn't proving anything. (The Falcons, in contrast, definitely deserved their overtime win against the Saints.) And you sure got one thing right: *Shakes fist at UGA*!

I don't think I've ever been in a stadium of 80,000 people who expected their team to lose before. After the last two weeks, the so-called UGA faithful Bulldog Nation held their breath on every play. The stadium was so quiet, I could hear the electronic buzz from the stadium PA system. 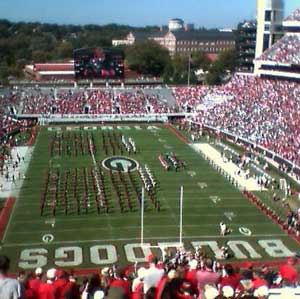 And we were almost not disappointed. Down only 3 points with no timeouts remaining, Mississippi State had the ball near our 20 yard line with 18 seconds left to play. Their quarterback didn't seem to understand the necessity of not taking a sack under any circumstances. When we hit him, he lost the ball. Though we recovered, it wouldn't have mattered, since no time remained on the clock and no other plays were run in the game.

So we won the game, no thanks to our own players. I heard "fans" in the crowd compare Matthew Stafford (3 picks) with Quincy Carter and Mohamed Massaquoi (3 drops and a fumble) with Terrence Edwards. One guy was verbally flaying OT Daniel Inman alive for his 3 false starts. After time expired, most of the crowd left with their head down as though we had lost. It's been a long season already.