In the past eight days, I've been to four football games, 1 high school, 2 college, and 1 professional. I sure do enjoy football season. If nothing else, it gets me out of the house.

I accompanied Trey to the Atlanta Falcons' prime-time home opener against the Philadelphia Eagles yesterday in a game that ended just before midnight. It was a fantastic game featuring a bunch of turnovers, big plays, and lead changes, and I'm quite pleased that I had the opportunity to go. 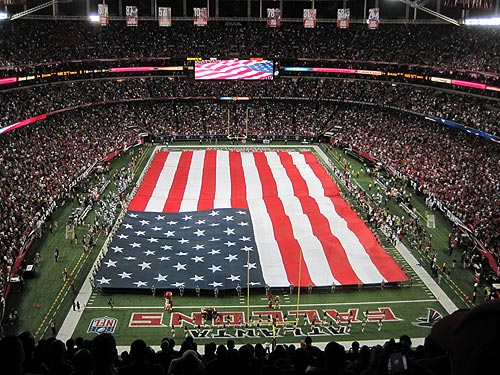 It was unclear who was better represented among the fan-worn jerseys in the stadium: current Falcons QB Matt Ryan or former Falcons QB Michael Vick. Ryan outplayed Vick in the game, if for no other reason than Vick's 3 turnovers. Vick didn't even finish the game, suffering a concussion late in the 3rd quarter and being booed off the field by the ever-classy Altanta fans.

It would have only been better if the Dolphins hadn't lost their game earlier in the day, making it look increasingly like another terrible season is in the making. True story: waiting to use a urinal at the Georgia Dome, I was the only person wearing a Miami Dolphins t-shirt in a long line of people clad in Eagles and Falcons apparel. Finally, I reached the front of the line and prepared to relieve myself. Immediately the fellow behind me loudly sighed and said, "we're going to be here awhile. The guy in up here is wearing a Dolphins shirt, and we all know they're slow starters." Smart ass.

The Atlanta Falcons played like dogs this Sunday, so it was fitting that Michael Vick returned to town to put them out of their misery.

Michael Vick had predicted that he would receive a standing ovation on his first return home to the Georgia Dome following his eviction due to federal conviction as a canine killer. He pretty much got what he expected. Never have I attended a sporting event that was quite so much a love letter to a single person, an event where a player was indeed bigger than the game, but that was what happened. Very few, it seemed, came for the game. (This was a good thing, as there wasn't one played, at least not by the Falcons.) Everyone was there for number 7. And to his credit as an athlete and entertainer, he gave us what we came to see. Most Falcons fans had justifiably fled by late in the third quarter, leaving only Eagles and Vick fans, whose chants of "Put in Vick" were answered as Vick drove the Eagles down the field for another touchdown. Then everyone went home.

I'd be lying if I said that I didn't take some vengeful enjoyment in watching the prodigal Vick return to Atlanta with the Eagles and pull the wings off the injured Falcons, 34-7. (Atlanta's lone touchdown couldn't have been less relevant, scored as time expired in the game against a third-string Eagles defense.) I figure the Falcons deserved the punishment it after the ingracious way that they treated the Dolphins in the season opener. So I ask, Falcons, how did you like them apples, because I thought they tasted pretty sweet.

I just returned from Philadelphia, where my brother and I watched the Philadelphia Eagles defeat the Miami Dolphins. Despite the scattered rain, bitter cold, and Dolphins' tenth loss of the season (0 for 10: we're still prefect!), I had a great time.

Philadelphia fans have a reputation as real assholes. And I can now tell you first hand that everything that you hear about them is all true. Though most of the fans were good natured before and during the game (a father pointed me out to his toddler as "the enemy," the security guard frisking me upon entering harassed me for wearing Dolphins' gear to the game, and the attendant who announced the discontinuation of alcohol service at halftime urged the crowd to yell at me instead of her), by the fourth quarter, with the Eagles' firmly in control of the game, the fans had worked up enough courage to devolve into a surly bunch of jerks. One fellow continued to taunt me until the final second ticked off the clock for supporting a "bunch of losers," and another that I encountered in line for the bathroom told me that "the Dolphins' fucking suck" and he hoped that I personally would die a slow and painful death.

My brother repeatedly pointed out that insulting me for being a Dolphins' fan during this winless season was the equivalent of abusing a helpless puppy. Well, now I know how Philadelphians treat puppies: they must be Michael Vick fans.

Wriphe [Official Comment]: Posted Oct. 7, 2011 at 02:23:49 AM
I was just re-reading this post and felt that I should add the footnote that on August 13, 2009, Michael Vick signed with the Eagles following the lifting of his suspension. I should advertise my services as a sardonic fortune-teller.