I can only wait for the final amnesia, the one that can erase an entire Wriphe.

Time to finish up August movies:

150. (1379.) The Inbetweeners Movie (2011)
Movie continuing the adventures of the British television show that is every bit as irreverent and uncomfortable and funny as the source material.

152. (1381.) The Mad Miss Manton (1938)
A fun, light screwball comedy / romance / mystery film that's at least as entertaining as anything on network television these days.

153. (1382.) Be Cool (2005)
The derivative sequel to Get Shorty isn't nearly as good as its predecessor. The highlight is Cedric the Entertainer's rant about race relations, but the rest is probably best avoided.

154. (1383.) Moonlight (2016)
White guilt stole La La Land's best picture Oscar! Ok, I admit that this film isn't bad. It's just that while I can relate to La La Land's story of heterosexual, rich young white creative people in love, I have a much harder time relating to Moonlight's story of homosexual, poor younger black oppressed people struggling to get by. Your mileage may vary.

155. (1384.) Gringo (2018)
Naive but enjoyable thriller about an honest man pushed to his breaking point faking an international kidnapping.

156. (1385.) The Mechanic (1972)
This is the Charles Bronson original, not the Jason Statham remake. Personally, I preferred the latter as it has a better defined narrative structure.

157. (1386.) The Eagle Has Landed (1976)
Fictional tale of a German plot to assassinate Churchill in the waning days of World War II. Michael Caine is the best part by far.

158. (1387.) What We Do in the Shadows (2014)
Mockumentary about a bunch of vampires in New Zealand ad libbed by the Flight of the Conchords cast. If you like that sort of thing.

It's going to be a busy weekend. 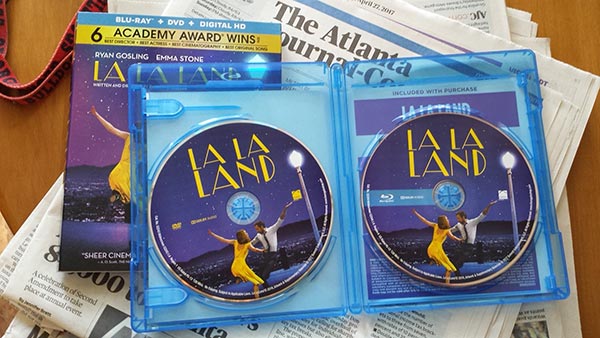 This is the first Blu-Ray I've ever bought, and it came with a separate DVD disc. I guess I'll just have to watch both to see which one I like better. (Sometimes, the things take two or three repeat viewings to be sure.)

I don't usually watch the Oscars because I don't care to sit through the pomp and circumstance when I can just read a list of winners the next day. But I tuned in this year because, well, La La Land. So, yes, I saw the Academy Awards' worst screw-up in 89 years as it aired live. Fittingly, it felt like a moment from the least represented genre at the Oscars: a horror movie.

Seriously, I'm not particularly surprised that the award went to Moonlight. I haven't seen it, but it gets great reviews. I'm sure that after years of functionally, ahem, segregating movies made by and featuring minorities, the Academy voters understandably jumped at the chance to reward a great movie about a young, gay, black man. Good for them. I also champion giving Oscars to films that didn't have great box office success. (La La Land's $140,000,000 gross to date may not be in Rogue One's orbit, but it's light years from Moonlight's $22,000,000.)

I'm not even disappointed that La La Land didn't win. It is a great movie, and I do love it. (Have I mentioned that?) I've seen it twice and counting. I will probably see it again before it leaves theaters. That said, I'll be the first to admit that it's a bit lightweight with an underbelly of unseemly sycophantic emphasis on the mythical "magic" of Hollywood and a distinctly whitewashed cast. I can understand how it's not everyone's cup of tea.

But to get the Best Picture declaration wrong? To fail to correct the error before the La La Land cast and producers took the stage? To deny Moonlight its moment in the sun by casting doubt on its win? To give Warren Beatty the wrong envelope and embarrass him in front of an audience of millions? (In the post-awards press conference, Best Actress award-winner and national treasure Emma Stone said she was still holding her card when Warren Beatty read it again. That means there were two Best Actress cards and no Best Picture cards? WTF, Academy!) Frankly, I feel bad for everyone involved.

So congratulations to Moonlight. I will see you one day. Until that day, even though the Academy didn't choose to recognize it, La La Land remains Best Picture in my heart.

Ken Posted Feb. 27, 2017 at 11:58:27 AM
Apparently there are two of EVERY card. One is held by one representative of the accounting firm responsible for tallying the votes and the other is held by...the other. They have 2 reps that go to the Oscars.

But I'd really rather be watching La La Land again.

Movies are off to a good start in 2017! (I'm trying extra hard to escape from reality these days.)

1. (1060.) King Solomon's Mines (1950)
The character of Alan Quatermain is famous as the stereotype of the colonial era European huntsman in Darkest Africa. I thought Stewart Granger was quite good. His female lead, played by Deborah Kerr, however, was treated with less sympathy than the natives, and her post-haircut scene is laugh-out-loud ridiculous. Ah, Golden Age Hollywood.

2. (1061.) Donnie Brasco (1997)
Remember when Johnny Depp was a good actor? I still don't like "mob" movies because they always always always glorify crime, but I found Al Pacino's depiction of a lesser, wannabe wiseguy very enjoyable.

3. (1062.) Spaceflight IC-1: An Adventure in Space (1965)
As much as I love '50s sci-fi, this felt more like a pilot for a television series than a standalone film. Its premise — a mutiny on a deep space colony mission organized by a tyrannical government — would make for a pretty good movie in 2017.

4. (1063.) Bob & Carol & Ted & Alice (1969)
Honestly, all art should be judged in context of its time, and movies are no different. B&C&T&A is very much a movie for the straight-laced upper middle classes struggling to understand the Summer of Love. I found it incredibly tame (and boring) by 2017 standards. Like Easy Rider, this one is probably best left to film historians and nostalgia buffs.

5. (1064.) La La Land (2016)
I usually leave movies I've covered elsewhere out of these lists, but damn, I loved this movie. I loved it, I loved it, I loved it. Am I gushing? Is this what gushing feels like? I loved it! (I bought the soundtrack CD and now I sing all of Ryan Gosling's lines and listen to Emma Stone sing back to me. Is that weird? It doesn't feel weird.)

Every once in a while, I see a movie that deserves better than being dumped into a list. This is one of those.

I had intended to see this even before it swept the Golden Globes. Worried that it wouldn't last long in theaters despite the accolades (it doesn't have any explosions, bare tits, or Disney princesses in it so you know the masses aren't going to turn out in droves), I trekked to the local Regal Georgian 14. I'm not a huge fan of this particular theater. It brags of those giant, newfangled reclining seats that you can either sit back in or have your feet touch the ground, but never both at the same time. Ugh. I felt like Edith Ann. (Look it up, Millennials.) If it was important to me to watch a movie in a recliner, I'd watch it in my living room, where the carpets aren't sticky, and the popcorn doesn't cost $12.

At the box office, despite the movie having officially started 10 minutes earlier, the ticket taker still insisted that I pick my seat from the two dozen remaining. "Reserved seating is strictly enforced," read the sign on the ticket window. Someone should have told the woman sitting in E8 when I got there. Rather than kick out a little old lady, I took her seat, E10, and sat next to a child and her sister whose father only realized that they weren't in a showing of Sing after thirty minutes of previews and La La Land's opening dance number. After the father toted his girls, their two boxes of popcorn, three drinks, and mountain of boxed candy out of my row, I, at 41 years old, became the youngest person in the theater. (Yet another sign of a movie soon to be at your local Redbox.)

Most movie lovers will tell you seeing a movie with a crowd of people intensifies the experience, as though sharing the laughs and cries with a bunch of strangers makes it more deeply felt. I don't buy that shit. The theater is dark and loud for a reason, and that reason is so that when someone answers her cell phone in the first act, you can't figure out where she's sitting. The theater can't really duplicate the feel of home unless robocallers interrupt dinner.

But at least the audience is paying attention. I guess. As soon as the movie was over, the friend of the old woman who stole my seat said, "I don't understand the ending." To which her male companion replied, "I think you can choose whichever ending you like." Sure you can. You don't even have to watch a movie to do that. I would think the underlying themes of La La Land are pretty universal, but I concede that if you've lived your whole life without sacrificing anything to achieve your dreams, if you've never been in or lost a love, if you have no passions or fears, if you slept through your twenties, if you're both blind and deaf, then this film probably isn't for you.

Fortunately for me, the movie more than made up for everything else. In many ways, it reminded me of That Thing You Do!, another great film with musical numbers (and Tom Everett Scott) and a message about being forced to chose which of the things in life really matter when you're on the road to becoming the person you want to be. When I saw that film in 1996, I left the theater to find that someone had broken into my car and stolen everything in it. Yet I didn't mind because I had enjoyed the movie so much. Yes, La La Land was a lot like that.

If you get the chance, go. It's totally worth seeing on the giant screen. Totally. And that's the truth.