We only have to look at ourselves to see how intelligent Wriphe might develop into something we wouldn't want to meet.

Once upon a time, that "Ken Harrison" fellow pictured below and I worked together in a comic book store. Now he's a "Supervisor in Charge" at a major electronics store. I'm sure he worked hard to earn what must be an important position given the redundancy of its title. 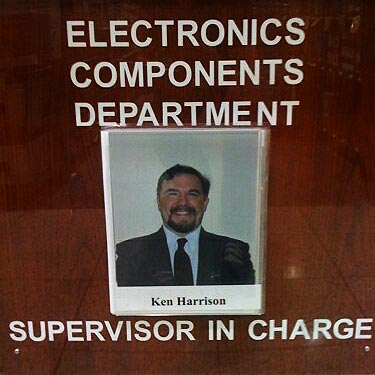 And I just received an email from my college roommate, an environmental lawyer, announcing that he will be a daddy this time next year. (All my high school friends already have kids.)

I suppose that this says something about how people change over time. It's a shame that some people can't deal with life as well as others. Look at me: I live in my mother's house where I read comic books and watch football all week. I have no wife, no kids, and no real responsibility.

Clearly, all of my friends must be doing something wrong.

The Empire Strikes Back is still the best sci-fi movie ever made. I know someone who thinks the effects look dated ("Who's scruffy looking?"), but after just watching it again, for the umpteen millionth time, I have to say that I think it looks damn good by any standard. You just can't improve on perfection.