I've been trying to determine if I want to spend the cash to get my hands on Justice League Heroes for the PS2. One of my real questions has been, "is Batman any fun to play?"

IGN.com says, "Sadly, the most popular DC character, Batman, is easily the most useless and joyless character you can select. Even Aquaman is more fun to play." Aquaman is more fun than Batman? I think that answers my question. Aquaman is like the guy who stands alone in the corner at the party while everyone else is wondering who invited that loser. Though I'd hesitate to call Batman the life of the party, Aquaman shouldn't even have been on the guest list.

Apparently the game forces you to play certain characters in certain levels. What's the point of having Batman as an available character if you're going to spend a bunch of time in space? What good is Batman in space? I don't think you can jam enough equipment into a utility belt to really make a difference against the vacuum of freezing, airless space. (Which makes me wonder: is there an underwater level where I'll be forced to play Aquaman? Ugh.) 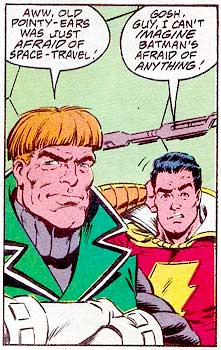 Now, I'm sure that Guy Gardner & Captain Marvel can survive in space. I'm also sure that they'd be really cool characters in a video game. I'm also, also sure that I'm going to be very, very old before that ever happens.