This isn't Wriphe, this is bigger than Wriphe. This is television.

According to MSN.com, the Air Force has a Special Forces technology development program codenamed BATMAN. That sounds pretty cool until you read that BATMAN is an acronym for "Battlefield Air Targeting Man-Aided kNowledge." As a Special Forces operative, are you really going to trust equipment built by a bunch of comic book geeks who can't even spell "knowledge"?

They couldn't come up with a word starting with the letter "n" to finish that acronym? Napalm, network, necromancers, necessities, neo-warriors, nightcrawlers, nodes... nothing? iNexplicable and eNigmatic kNavery like these iNaccurate Names really twist my kNickers in a kNot.

I've been busy this past week installing a fence at my brother's home in Dublin, GA. I've been calling it a cyclone fence, but you probably know it as a chain link fence. Turns out that cyclone fence got that name from the Cyclone Fence Company of Waukegan, IL, a trademarked brand now owned by U.S. Steel.

So I've been committing the same error as people who call a copy a Xerox, facial tissue Kleenex, a hook and loop fastener Velcro, and soda Coke. (For those paying attention, the grammatical error of substituting the specific for the general is called a metonym.) Worse, Cyclone Fence was initially a northern brand (though the concept of the chain link fence was invented by the British), so I have unwittingly been using a Yankee word! I apologize to ya'll for this error and will try to correct my usage in the future.

P.S. I'll post a picture of Trey's fence once I've developed my the pictures still in my kodak.

[UPDATE 08/03/10]: Pictures. Note the DirecTV dish in all three pictures for site reference. 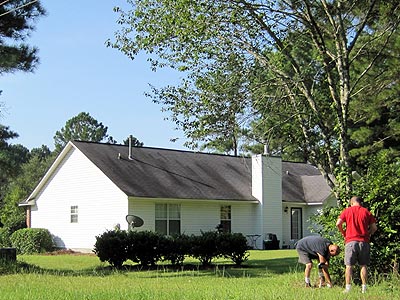 Start of Day 1: It doesn't look that big, right? Next time you shovel the concrete.

Start of Day 2: I lost track of how many fence posts after I was attacked by the fire ants. 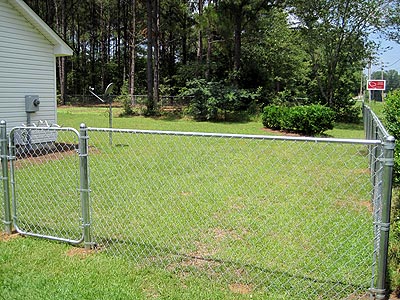 Facebook wins again: the 2009 New Oxford American Dictionary Word of the Year is "unfriend", a term that apparently defined "to remove someone as a 'friend' on a social networking site such as Facebook." Now in addition to promoting the decay of polite society, Facebook is ruining my language.

"Unfriend" was chosen over such universally accepted words as "netbook," "sexting," "tramp stamp," and "teabagger," which it turns out is now used with a complete lack of irony to describe participants in the Tea Party movement. (Let's just say that "teabagger" means something completely different where I come from.) This proves the voice of Facebook dominates that of the traditional mass media, at least within the offices of the New Oxford American Dictionary. And yes, Google assures me that the publisher of the NOAD, the Oxford University Press, does indeed have a Facebook page. Not that I'd go to Facebook to confirm it. Sure, that may be bad journalism, but I've got my principles.

Yes, comic books can also be textbooks! Though it may not seem so at first, Reed Richards, the so-called "Mr. Fantastic" and self-described genius, is correctly using the word "myself" in the above panel.

According to my Unabridged Second Edition-Deluxe Color Webster's New Twentieth Century Dictionary (which surprisingly has color on only 16 of 2,305 pages), the word "myself" is defined "a form of the first person singular pronoun, used: (a) as an intensive; as I went myself; (b) as a reflexive; as I hurt myself; (c) as a quasi-noun meaning 'my real, true, or actual self'; I am not myself when I rage like that." While the Quicksilver may use the first example sentence and the Incredible Hulk the third, Mr. Fantastic is clearly interested in hurting himself, so to speak.

In Reed's sentence, "myself" is an intensive pronoun referring to the sentence subject, "person." If Reed had said "I have that qualification myself," there would be less confusion, but super geniuses just don't talk like common people. For the sake of clarification, consider the following sentence diagram (don't look at me like that; sentence diagramming is way more fun than Sudoku):

So there you have it: proof that repeating anything that Mr. Fantastic says is not only melodramatic fun, it's also grammatically correct. It really gives us all something to think about, doesn't it?

In my last entry, I referenced vulcans. I've wondered since if the word should have been capitalized.

Mr. Spock, the logical first-officer of the U.S.S. Enterprise and inspiration for my comment, is the result of a mating between a humanoid of the planet Earth and a humanoid of the planet Vulcan. Mr. Spock is frequently referred to as a capital-"V" Vulcan by his colleagues. And here is where I made my erroneous assumption: the English name of his actual race is never clearly established.

Calling Mr. Spock a Vulcan is the same as calling Captain Kirk an Earthling, i.e. a resident of the planet Earth. As residents of a particular planet, Vulcans and Earthlings deserve their capitalization. However, Captain Kirk is as much an Earthling as a kangaroo rat, fruit bat, or camel spider. (Note the lack of capitalization of the common names of those species.) Captain Kirk, more specifically, would be described as a human. Based on the context of dialogue overheard exchanged between Mr. Spock and his ship's doctor, one Leonard "Bones" McKoy, I assumed that Mr. Spock must represent a race commonly called vulcan, hence my lack of capitalization. But this now appears to have been a mistake. Damn it, Bones, you're a doctor, not a linguist!

A little research reveals that Vulcans call themselves V'tosh or whl'q'n in their native tongue. Clearly, words that hard to pronounce would be bastardized or ignored by English speakers. In fact, the language, like the people, the planet, and practically everything else associated with them (including nerve pinches!), is simply called Vulcan by almost everyone the crew of the Enterprise ever encounters. Were I an apologist, I'd blame these quirks of language on the weak programming of the Universal Translator. (Clearly vocal recognition software is as crappy in the 24th Century as it is today. But any computer is only as good as it's programmer, right, Dr. Daystrom? [See Star Trek episode 53, "The Ulitmate Computer" for details.])

So, in hindsight, I should have capitalized the word Vulcan. On the up-side, I don't have to apologize to anyone, as being a logic-driven Vulcan means never having to say "I'm sorry."

As the year end approaches, brace yourself for the deluge of retrospective lists for 2008. For example, it's only the second day of December, but the dam is already bursting:

Found on the internet: a blog about confectionery fiascos. I especially appreciated the Grand Theft Auto San Andreas birthday cake for the 4 year old.

And if you're in that sort of mood, you may also appreciate the "blog" devoted to "unnecessary" quotation marks. I did.

The word "nikhedonia" is defined as the pleasure of the anticipation of victory. Now that the Miami Dolphins have extended their season losing streak to 7 games, the worst start in franchise history (>sigh<), my pleasure at watching the Fins play decreases as I anticipate very few victories. Next week we will be traveling very far from home to play the New York Giants in London. Where we, currently tied for the title of Worst Team in the NFL, will no doubt shock and awe the Brits into never watching American football again. Sorry, gov.

In case you're wondering, I discovered the word "nikhedonia" while reading the book There's a Word For It, in which I discovered that the particular disorder of my friend, who I will call Jason in the interest of maintaining his anonymity (he knows who he is), is called "haptodysphoria." Essentially, that means that Jason can't touch raw cotton because it feels icky to him. Other than that, Jason happens to be a pretty normal guy. For a haptodysphoriac, that is. You the man, Jason!