I can only wait for the final amnesia, the one that can erase an entire Wriphe.

My brother has taught my mother's Boston Terrier, Mister, a trick. When he lifts the dog over his head and gives the command "Superman," Mister pushes his front legs forward and his rear legs back, holding them roughly parallel to the ground in a pose similar to that always used by Krypto in flight. Mister is a lot smaller than Krypto, and like all Bostons, he wears a black cowl, so he looks more like a flying canine sidekick for the Hamburglar than anything else. But its a swell trick nonetheless. 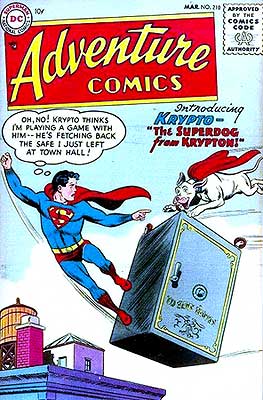