Wriphe is fleeting -- and therefore endurable.

There it is again! It haunts me in my dreams! 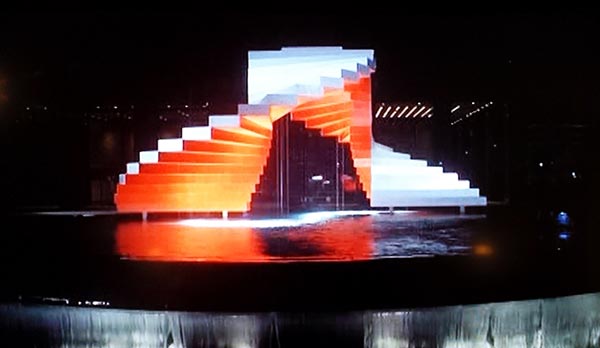 I saw this statue, "Double Ascension," everywhere back in 2007. Now I've spotted it again, this time in a movie!

6. (543.) Marathon Man (1976)
No, I'd never seen Marathon Man before. I'd heard about it, of course. The torture scenes are infamous, and rightly so. The movie stands up well. (It could have used a better ending, but I've read that scriptwriter William Goldman had the same complaint.)

There it is, the backdrop for the important scene where Roy Scheider gets stupid. The film takes place in New York City, so seeing a statue that you know sits firmly in a fountain in Los Angeles breaks the mood a little. What is it with this statue that directors keep using it to stand in for New York?

Ah ha! After months of wondering, I've finally found it. "It" is the name and location of a statue that has been looming large in recent months on my television: an orange, double-helix fountain sculpture.

I first noticed the sculpture late last year in a Sprint Mobile Broadband television commercial. It was background set decoration. Big and bright orange, it stands out from a typical back drop. Because it appears in a commercial, I assumed that it must be in Los Angeles, where most commercials are shot. Yet within days, I spotted a Dockers television commercial when a man in business slacks runs in front of it. The Dockers' ad prominently featured San Francisco landmarks.

Now I HAD to know where that statue was, featured as it was in two television commercials running simultaneously, apparently featuring two different locations. I was especially curious as to this statue's location, perhaps even because such a large, noticeable object was completely unnecessary for the products' sales pitches. (Though let's face it: I don't have a laptop computer, and I'm not wearing slacks. I've been paying too much attention to these commercials. come to think of it, I probably pay too much attention to all commercials. But that's why they run them, right?) Google searches on "orange fountain sculpture" in "LA" and "San Francisco" turned up nothing. That statue could have been anywhere.

But tonight I caught a break! The statue was featured prominently as "Kirby Plaza" in New York City during tonight's "Heroes" episode, "The Hard Part." (I fully endorse NBC's "Heroes," by the way. It's great television.) As I suspected, the name "Kirby Plaza" was fictitious, an homage to Jack "King" Kirby, the man most responsible for the look of modern comic books. (He's so important, he has his own museum.) Thank goodness for obsessive fans. One show fansite mentioned that ARCO Plaza was a planned shooting location for the episode. A few clicks later and eureka! (That's "eureka" as in, "I found it," not "Eureka" as in the also Wriphe-endorsed show on the NBC-owned Sci-Fi Channel.)

Summarizing from publicartinla.com: the steel statue, titled "Double Ascension," was installed in 1973 in ARCO Plaza in Los Angeles. The statue was designed by Bauhaus professor Herbert Bayer as the first in a series of Los Angeles public art pieces aimed at helping to revitalize downtown LA. Bayer originally named the piece "Stairway to Nowhere," but ARCO executives didn't much like that title (for obvious reasons), so it was changed.

The plaza, a virtual city-within-a-city, has since been renamed City National Plaza after City National Bank bought the buildings after they were vacated by ARCO following ARCOs assimilation by BP. There seems to have been some concern that with new corporate owners would come changes to the site. Instead, the sculpture, seen from several angles here at arcitectfad.com, has been embraced by City National and become something of a motif for the new owners' decorations, serving as a pattern for the surrounding tables as well as the logo for the building's website. I also discovered that in addition to the recent commercials and television appearances, the piece was in the movie Pretty Woman.

The plaza are managed by Thomas Properties Group (TPG), which also manages LA's Universal City, home of and General Electric's NBC Universal Studios. Filmed at Universal City is a television show called "Heroes." (Did I mention how good that show is?) Does this make "Double Ascension"'s recent media exposure coincidence or conspiracy? You be the judge. Meanwhile, I'll keep my eyes out for an appearance of the statue on "Eureka" just in case it shows up there.