Wriphe is not having been told that the man has just waxed the floor.

Saturday, I attended the wedding of another "old" friend. Ken is yet another fellow who I first met via the Comic Company in about 1996 when he was self-publishing his comic, Steviebear. Eventually Ken would become my manager at the Comic Company. Together we attempted to keep the store alive the owners decided to sell their stock and property, but that never quite worked out.

Anyway, it seems like he finally found the right girl in Robin. Ken is a champion procrastinator, leaving Robin to plan everything for the wedding. (Which, honestly, is probably the way that Robin likes it. She knew what she was getting into when she decided to marry the guy.) To everyone's great surprise, that led to this:

Yes, those are their actual wedding rings. And, yes, they do reference dialogue from the love scene in The Empire Strikes Back. I don't know if that is true love, but it certainly is something unusual.

I had a dream last night that I was working with Dick Schwartz and Jim Groff in the Comic Company again. The personalities were spot on: Dick seems affable but is really so deaf he has no idea what you're saying, and Jim is polite and professional but completely disinterested in comics. How did I end up enjoying a job so much where no one ever listened to me?

This dream isn't too uncommon for me. I dream quite frequently about old jobs. My co-workers are usually as I remember them. Or, more accurately, how I remember their personalities. (Although I have a mind for trivia, I was never good at remembering faces or names.) What always changes are the locations. Maybe it's my mind's way of preventing me from guessing what's coming next, just like how The Magnificent Seven is really the Seven Samurai but hopes you won't notice for all the sand.

While I dream occasionally about working at the comic book store, I more often dream about being a waiter again. That dream is always the same. I'll be enjoying palling around with my nameless co-workers for awhile before the dinner rush starts. For a time, I'll be on top of the game. But inevitably, too many people ask me to do too many things at once, and I become a stressed-out basket case. I got fired from every job I ever had as a waiter. If my dreams are any indication, I wasn't very good at it.

But my dreams of working at the comic book store are never negative. That should probably be expected. I loved that job. I never would have commuted 120 miles round-trip to work at a restaurant as I did when working at the Comic Company. Heck, these days you have to pay me $100 just to take the trash out to the curb.

Thanks for the opportunity at my dream job, Dick and Jim.

Ken Posted Nov. 15, 2012 at 03:20:27 PM
I'll second that. Longest job I ever worked. 8 years. I dream about it all the time too, although my dreams generally revolve around Dick and Jim reopening the store, usually in the same spot, and trying to build it back up again. I usually either start the dream working there, or somehow finagle my way back in. Never occurred to me that you might dream about it too.

Rami Habeebullah Posted May. 26, 2016 at 01:11:06 PM
I am happy to have worked with Dick from 1986 to 1994. I worked at his Mistletoe location, then on Church St at the Suburban Plaza, then back at Mistletoe Rd. Ahh those were the days. I knew Ken, Jeff, and Dick's family. And I do remember most of the customers still. I pray everyone is well, especially Dick and family. My husband Bilal as been gone for 11 years now, but life has been good. Happiness to all! Rami

Tomorrow I will attend the wedding of a fellow I've known for more than a few years. In fact, I owe him for getting me a job at a comic book store in the 1990s. I sure did love that job. 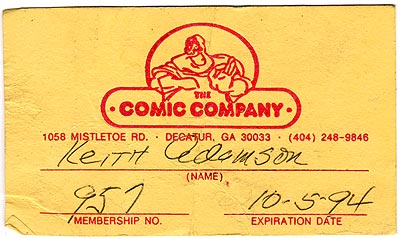 For the record, my first day on the job was Keith's last. I guess he was supposed to be training me, but instead he only taught me that running a comic book shop was so easy, you could spend the whole day playing Star Wars: Rebellion on the store computer. His "work" was interrupted when he decided that a stereotypically ethnic customer was shoplifting packs of collectible card games. When confronted, the suspect put his hand in his coat, as though going for a gun. Keith kept his head -- which is not Keith's defining personality trait -- and thanks to the timely intervention of customer Cliff Krapp, who employed an unusual strategy of "respect"-ing potential shoplifters, was able to recover the merchandise and remove the potential offender with no further incident. (Where was I? I was on the phone with the police crouching safely behind the largest, heaviest piece of furniture in the building. Safety first!)

Anyway, so now Keith is joining a different, much more exclusive club. While it won't offer him the same great discount on comic books, I presume it offers other benefits. There's no way those benefits are as great as cheap comic books, but I figure I owe him the benefit of the doubt. Best of luck, buddy.