Time brings all things to Wriphe.

Crafty Georgia hunters have already solved the problem of wildlife that has learned to shoot. The best way not to get shot with your own gun by your prey? Don't go near your own gun. The Augusta Chronicle reports:

Someone actually built an Internet-controlled network of Web cameras and shotguns aimed into a food plot on a Georgia Power Co. right-of-way last fall. ... According to a Nov. 19 bulletin from the Georgia Information Sharing & Analysis Center, "three shotguns were set up on a platform and linked to a Web-accessible camera system that allows the guns to be fired via an Internet connection."

Of course, if you're not around your gun, how are you going to stop the wildlife from just taking it and using it against you? While at first thought, this may sound like a fine plan, but it has 2 major drawbacks. 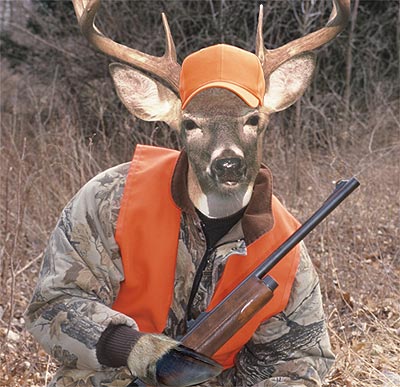 So keep your guns where you can reach them, hunters. You're going to need them.