Somehow Wriphe doesn't always pay off to those who are most insistent. 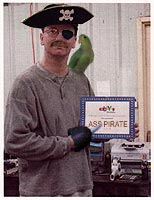 Say, you remember that co-worker that I mentioned the other day, the one who received the award? He's been on my back about posting him holding a sign identifying him as a schmuck, by the way. What a schmuck.

Well, yesterday he was named Employee of the Month at his company for the umpteenth consecutive month. I had to spend the day listening to other people who work in the office building congratulate him on his "accomplishment." Listen, people, he's Employee of the Month because he's the only one working there. (I'm merely temp help.)

You can't tell him that, though. All this praise is going straight to his big head. Why, at lunch today, I swear he told me that he deserves a raise. Can you believe that? Now he's too good for $6 an hour! What nerve!