The best things in Wriphe make you sweaty.

It didn't take long for the 2017 UGA football season to go off the rails. Eight minutes and thirty seconds, to be precise. 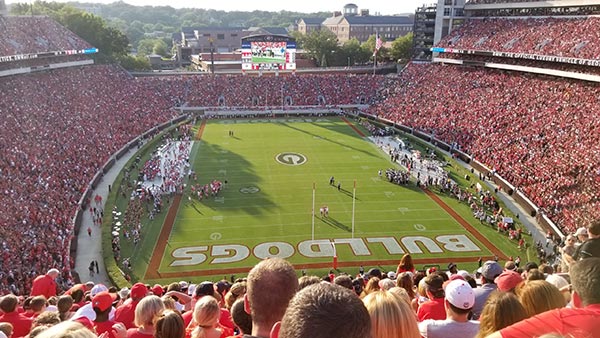 There between the goalposts you'll see UGA's 2017 season being helped off the field.

That's when sophomore starting quarterback Jacob Eason went down with what has been called a "knee sprain" on a late hit out of bounds. As I write this, the true extent of the injury is unknown, but judging by how quickly Eason disappeared from the sideline never to return, this thing is serious.

Eason wasn't exactly tearing up the field in the brief time he did play. He completed one of three passes for four yards. His two misses were overthrows of open receivers. Like the rest of the team, he seemed too "tight" to start the game, a recurring problem for the team during Smart's increasingly dissatisfying tenure.

Everyone loosened up when true freshman (and the latest in a line of "No, Seriously, He's The Next Great Thing℠" at quarterback) Jake Fromm replaced Eason, and the Bulldogs went on to win in convincing fashion. Chubb and Michel looked game ready, and everyone was happy. Until the fourth quarter, when Bryce Ramsey, in true Bryce Ramsey fashion, threw two interceptions on two consecutive drives on the only two passes he attempted in the game! All 10 of Appalachian State's points came indirectly from Ramsey turnovers. Sigh. I hope next week's opponent — Notre Dame — wasn't watching.

Jake Fromm, you better find a way to make a uniform out of bubble wrap. Something tells me you're going to need it.