I'm not sure exactly when it happened, but somewhere in time the Nobel Peace Prize lost its way. How, exactly, have Al Gore and the IPCC "done the most or the best work for fraternity between the nations, for the abolition or reduction of standing armies and for the holding and promotion of peace congresses"?

Sure, maybe Global Warming, the boogeyman-under-the-bed of the 21st century, is a potentially dangerous thing threatening the world, but what has Al Gore done to foster peace and prevent future war over it? Thrown a concert? Started a cable television channel? Made a very profitable movie? Invented the Internet?

If Global Warming existed before Gore championed it's opponents, then he is more similar to AIDS activist Ryan White than Polio vaccinator Jonas Salk. Should you give someone an award for suffering from a medical condition? Especially a condition that that someone is profiting heavily from?

Seems to me that the much-lauded Peace Prize has become about as relevant as Britney Spears' panties (or lack thereof) when all it does is promote the current cause celebrite. What's next? Awarding terrorists? 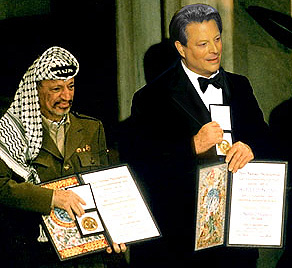 I don't consider myself a deep thinker. (Unless, of course, I'm trying to figure whether the immorally apathetic Comedian, the unyielding vigilante Rorschach, or the mad machinations of Ozymandius represents a greater threat to the crumbling, stagnant civilization in Watchmen.) And while I'm far too shallow for frequent introspection, I do constantly marvel at modern technology. How often do you stop and think about how your life has changed since the onslaught of the World Wide Web? Can you even remember a time when you had to buy a magazine to see naked girls? Thank you, Al Gore, for inventing the internet!

Who is more dangerous: Michael Moore or Al Gore? Both are politically-minded liberals who use technology, one-sided propaganda, and scare tactics to much remarkable success, convincing a large number of people that the status-quo is dangerous to their future. Is Moore's masterful manipulation of the mass media any less deceiving than Gore's ingenious beguiling of the genuinely guileless?

I have friends who are completely in the camps of one or both, and, although even a jaded fellow such as myself has to admit that they do have their points, I am sincerely wary of their means and motives. Is it acceptable to follow a idealistic fool (Moore) or an compulsive liar (Gore), even if they're right? Is doing the right thing for the wrong reasons acceptable?

Once upon a time, Optimus Prime would have told me, "No, it isn't." But my Optimus Prime is dead, replaced by some Michael Bay zombie of CGI scrap metal. And I can't turn to Yoda for answers, because he was recently revealed to be a procrastinating quitter. Even Superman, as of late, has begun to waffle like an anguished X-Man after fathering a child then leaving the woman that he supposedly loves to raise their child on her own so that he can selfishly sow his own wild Kryptonian-oats. I'm rapidly running out of role models here, people.