1/2010. Cruella (2021)
Yeah, it looks good, and yeah, it's got a good soundtrack, but this became the first Emma Stone movie I could not make it all the way through. It's not her fault, exactly. She does manage to marginally soften an inherently vile character, but Cruella's character arc is about embracing the evil within. After the end-of-third-act twist making bad people even worse, I decided I just didn't want to spend any more time with any of the awful, awful characters that apparently populated 1970s London. Burn it all to the ground.

2/2011. The Line King: The Al Hirschfeld Story (1996)
Technically, this documentary of the famous Broadway caricaturist was not really new to me. I had forgotten that I originally saw it in college as one of the films the late lamented Bill Marriott showed aspiring artists in his drawing classes. Hirschfield was a master artist who lived an interesting life, and I heartily recommend this to any art (or Broadway) fans out there.

3/2012. The Great Dictator (1940)
I started watching this in 2021, but couldn't get into it. I forced myself to finish it here, and I can understand its historic (and political) significance, but I wouldn't want to watch it again. What can I say? I just don't enjoy watching Chaplin mugging for the camera as the Tramp or as Hitler.

4/2013. Josie and the Pussycats (2001)
Unlike The Line King, I thought I had seen this, but apparently I had it confused with its contemporary, Spice World. My mistake. There's no way I would have forgotten some of this content if I had seen it before. ("I still don't understand why you're here." "Because I was in the comic book.") Spice World is a parody of the music business, but Josie is satire, an unflinching social-commentary satire masquerading as fluff. It's maybe even more relevant to life in 2021 than it was to 2001.

The over-the-top overt product placement in this film about subliminal influencing is very, very much the point of this spear. It's become well publicized that the producers received no extra funding from placing the corporate intellectual products in the film, but that sort of misses the point that brands like Target, Revlon, and, yes, Coca-Cola *still* benefited from putting their logos before the eyes of movie audiences, even as a punchline. The beast knows that the only bad press is no press. 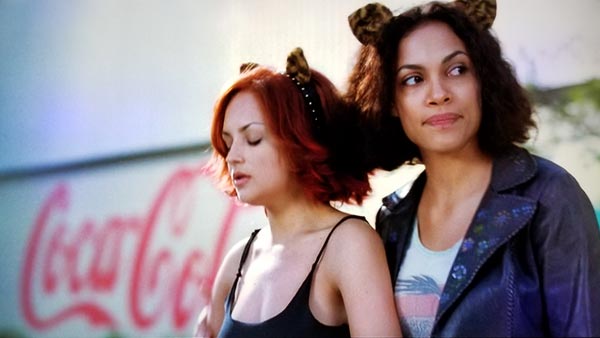 You know you want to drink a Coca-Cola right now.