In the haunted house of Wriphe, art is the only stair that doesn't squeak.

Movies are escapism! Let's get away!

137. (1996.) Skidoo (1968)
If you're familiar with Dragnet 1967, you know how it was often a square's hostile misinterpretation of hippie drug culture. This movie, made about the same time, tries to do better, like it was made by a well-intentioned but out-of-touch grandfather. It's worth a peek for being Groucho Marx's last movie (and you get to see Ralph Kramden on acid!), but the best part far and away are the mock commercials in the opening scene.

139. (1998.) That Way with Women (1947)
Also a light comedy, though this time the protagonist — Maltese Falcon heavy Sydney Greenstreet as a competent and considerate automobile magnate — isn't directly involved in the romance he's helping to set up. Fun.

140. (1999.) The Loveless (1981)
First film for both Kathryn Bigelow and Willem Defoe, and it's all atmosphere. Think The Wild One without any narrative and the point is that the "outsider" bikers are the sane/moral ones and "civilization" is a lie. I liked it. 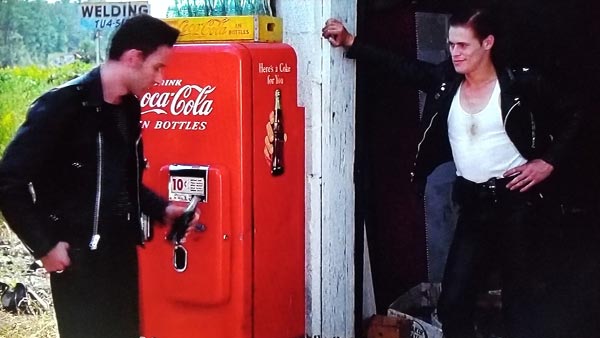 Too cool for school? Drink Coke!

141. (2000.) Lust in the Dust (1984)
This parody Western is Tab Hunter's version of a Jon Waters' film. It has its moments, mostly courtesy Divine, whose bonkers performance is exactly what the material deserves.