The essence of Wriphe will never be captured by even the greatest of formulas.

We're nearly in 2021, and I'm a whole month behind on my movies list. Here's the first half of movies watched in November.

189. (1843.) I Died a Thousand Times (1955)
A gangster strives to pull off one last big job before retiring. The problem with this sort of film is that if you know anything about Hollywood of the era, you know how it is going to end before it even starts, so the journey has to be worthwhile. In hindsight, I don't think it was.

190. (1844.) Dead Reckoning (1947)
Here's Bogart once again trying to recreate the The Maltese Falcon with varying shades of success. A series of unlikely coincidences propel the plot in act two, but it sticks the landing with a very satisfying ending.

191. (1845.) Fools in the Mountains (1957)
Have you ever seen any of Jacques Tati's French comedies? (Pratfalls, sight gags, mistaken identities, etc.) This Norwegian film is much like those, but with sound, genderbending, and a romantic comedy vibe. Very enjoyable.

Of course I want.

192. (1846.) The Greatest Show on Earth (1952)
According to Hollywood legend, seeing this film is what motivated a young Steven Spielberg to go into directing. It won Best Picture in '52 opposite some films that have earned better reputations over the years (High Noon, The Quiet Man). Yes, the train wreck is impressive, but for my money, the highlight by far is watching Jimmy Stewart commit to his role as a killer in clown makeup. Stewart is just the best. 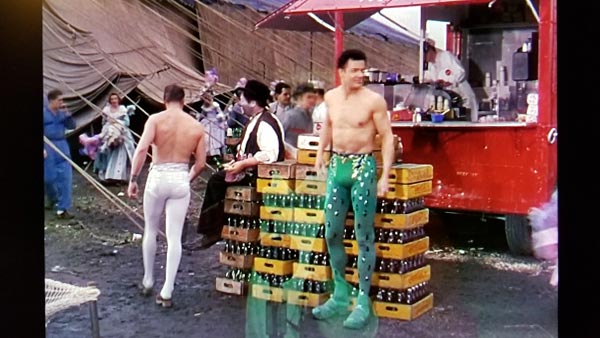 Forget great; it wouldn't even be a very good show without a Coke.

193. (1847.) The Circus (1928)
Disclaimer: I don't know why, but I do not find Charlie Chaplin very funny. I think Harold Lloyd and Buster Keaton are hysterical, and Chaplin is undoubtedly technically proficient bot in front of and behind the camera. But I quite literally fell asleep watching him fail to understand how clowns work. *shrug* Your enjoyment is probably proportional to how much you enjoy tramps.