Wriphe is hard. After all, it kills you.

1. (1655.) The Spy Who Dumped Me (2018)
Just your run-of-the-mill buddy road action romance comedy spy movie for chicks. Being a mash up of so many genres, it stuck mostly to the established stereotypes of each. That there were so many moving parts (and actors having fun) kept it from being stale. I enjoyed it.

2. (1656.) Chopping Mall (1986)
Imagine Short Circuit with Johnny Five replaced by Micheal Myers and you get this so very 1980s slasher flick. Recommended to fans of Friday the 13th (I'm talking to you, Keith). 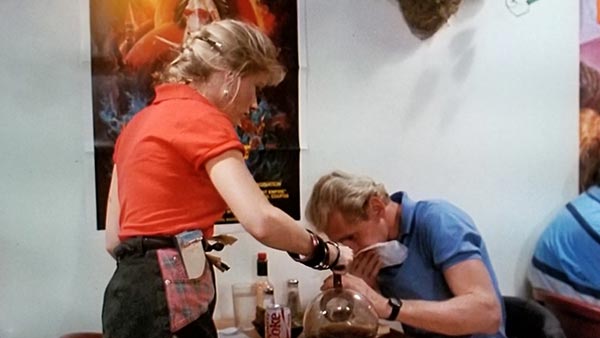 There were better Coke shots before this, but I wasn't ready.

3. (1657.) A Beautiful Day in the Neighborhood (2019)
I liked this as a work of fiction, but I just could not accept Tom Hanks as Fred Rogers. (And although the protagonist is based on a real person, I think it's ridiculous to call a film about a fictitious person a biography.) Therefore, the highlight of the film was the miniature sets used for establishing shots and transitions. If you want to see a movie about Mr. Rogers, I'd recommend last year's Won't You Be My Neighbor documentary instead.

4. (1658.) Kansas City Confidential (1952)
Good, suspenseful noir about a man-done-wrong chasing down the men who did him wrong. Enjoyable.

5. (1659.) Magnificent Obsession (1954)
This is dreary melodrama follows a horrible, trust-fund cad (Rock Hudson) who falls for the woman whose life he destroyed (Jane Wyman) and becomes the world's best brain surgeon to fix her. Ugh.

6. (1660.) The Lodger (1927)
Alfred Hitchcock's third film was obviously heavily influenced by the German expressionism films of the era. As so many silents do, it sags a bit in the middle, but it's totally worth a watch for Hitchcock fans. (It contains the first Hitchcock cameo appearance, by the way. His back is to camera in an early shot of a newsroom. I missed it.)