Contrary to what you might have read, I do watch movies that aren't Hallmark movies.

168. (1607.) The Quiller Memorandum (1966)
Another Cold War spy movie that is long on drama/suspense yet light on action. That works to its advantage, especially considering the delightfully gray ending. (How did George Segal start his career with roles like these and end his career on sitcoms? That guy has range.)

169. (1608.) The Emoji Movie (2017)
Critics railed against this movie, calling it among the worst ever made. I don't think it's *that* bad, but it is too little material spread too thinly over some poorly-thought-out scenes with a moral that makes no sense given the initial premise. In summary: Meh.

172. (1611.) Brother John (1971)
I read online someone called this the "blackest film ever." It's a fitting description. Silent, judgy Sidney Poitier is a, what, an angel? An alien? I watched this twice, and I still don't know. I really enjoyed guessing, though. I'd watch it a third time.

The movie takes place in a small Alabama town filled with racists and rapists. Almost everyone is knee-deep in petty sin. It's a weird place to put so much Coca-Cola product placement. 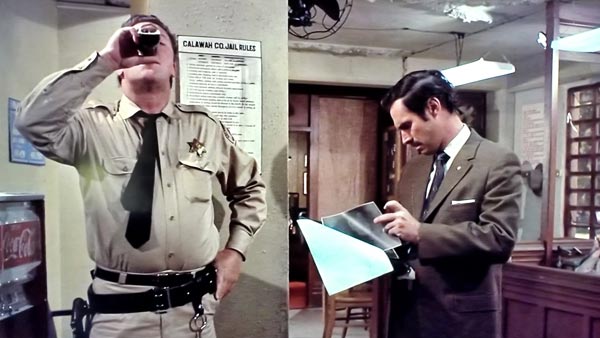 You can't see it here, but there's even a Coca-Cola clock on the wall behind Bradford Dillman.

174. (1613.) Belladonna of Sadness (1973)
I can sum this animated film up with three letters: W.T.F. In a slightly longer summary, it's about a young wife in medieval Europe who is raped by nobility on her wedding day, discovers she likes sex (a lot), and eventually makes a deal with the devil to... have more sex, I guess? Her endgame isn't exactly clear. She's burned at the stake, and the French Revolution happens. The end. Seriously bonkers. Some of the animation is quite impressive, though.

175. (1614.) Riders to the Stars (1954)
To prove that space travel is feasible, three men are launched into space to find out why metal fatigues so quickly outside of the Earth's atmosphere only to discover that the human mind is the most fragile material of all. Reading that back, I realize that sentence is far better than the movie itself. Avoid.