It frightens me, the awful truth, of how sweet Wriphe can be....

163. (1222.) It's a Wonderful World (1939)
This screwball comedy staring Jimmy Stewart should not be confused with It's a Wonderful Life. There's little exceptional about this, which is not to say it's bad. It's just not a classic.

164. (1223.) Ace in the Hole (1951)
Man, Kirk Douglas made some great movies. The premise of this movie, that a journalist would endanger the life of an innocent man to get a bigger story, is so 2017. Too late does he realize what this has done to his soul. Very good.

165. (1224.) The Shop Around the Corner (1940)
The movie that inspired You've Got Mail with Jimmy Stewart in Tom Hanks' role. I like Tom Hanks as much as the next American, but Stewart does it best.

168. (1227.) Dudes (1987)
A cult classic starring Jon Cryer as a New Yorker having a fever dream trip through the modern Old West. This eclectic movie has a lot of quirkiness going for it — especially Daredelvis — but despite its charm can't overcome the fundamental problem of its violent heart.

This movie included an overt bit of Coca-Cola product placement. After seeing this and the Coke bottles in Ace in the Hole, I decided from now on, whenever I see a Coke on screen, I'm going to include a screen grab in my review. So have a Coke and a Dude: 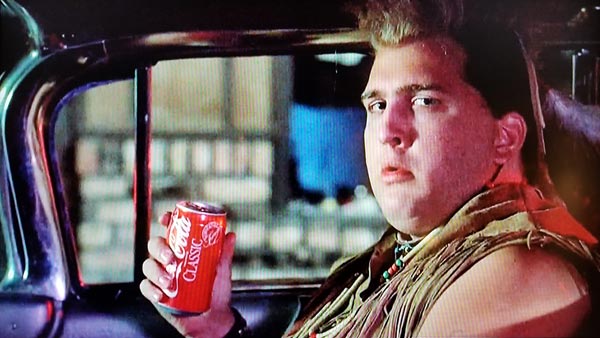 169. (1228.) Broadway Melody of 1936 (1936)
Jack Benny! Eleanor Powell! Buddy Ebsen! There's a lot to like about this tap-dancing musical. It has some product placement itself, as Ebsen wears a Mickey Mouse sweater for his first dance number (with his sister)! Utterly charming.

170. (1229.) Joysticks (1983)
Teen sex comedies of the 1980s have a special place in my heart (and my groin). This one concerns a video arcade that runs afoul of Jo Don Baker with all the bizarre misadventures you'd expect. Not a bad choice to end the year.