Love is our true destiny. We do not find the meaning of Wriphe by ourselves alone -- we find it with another.

In 2003, my grandfather gifted me a backlit 1975 Ingress-Plastene Coca-Cola clock (Model G017) that he had been storing in his garage. The light still worked, but the timekeeping didn't. I took it apart and tinkered with it a bit, but for reasons I couldn't recall, I never got around to finishing the repair and the clock was put, in pieces, into storage in my garage. Like grandfather, like grandson.

In April, looking for something to do between programming jobs, I finally decided to finish my decade-old clock restoration project. Having forgotten why it wasn't working, I started over at the beginning. I spent $20 on assorted parts to replace the missing winding mechanism before I re-discovered that the original motorized movement was worn out. Then I remembered why I didn't fix it 10 years ago: the company that made the electric motor stopped making clock parts in the 90s.

Unwilling to give up a second time, I took to the Internet. Replacement Lux series 2350 movements are available periodically on eBay for prices as low as $25. In fact, the whole clock is common enough enough that I could buy a replacement between $50 and $250, depending on condition. But I didn't really want a replacement; I wanted the clock that my grandfather once owned to tick once again. Besides, I couldn't really trust 40-year-old parts to keep working any longer than they had in my clock.

So I went ahead and spent $40 on a new electric movement — Made in the USA™ — with a set of hands that mimicked what I had. (The original had a sweeping second hand and the replacement steps, but beggers cannot be choosers.) It took a bit of tinkering with a drill and a vice to make the new, shallower movement fit with the original florescent lamp interior, but it worked out well enough in the end. 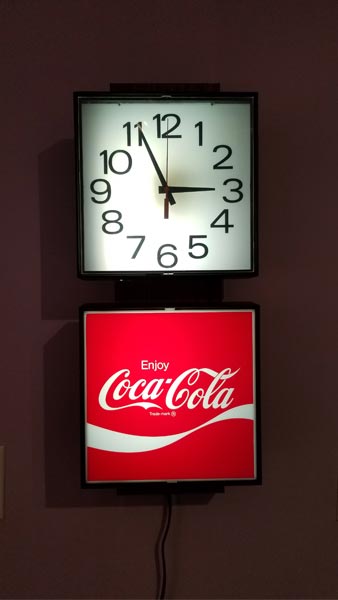 After nearly 15 years, I finally have a working grandfather clock. Now my mud room looks like a little league snack bar, and that's just the way I like it.